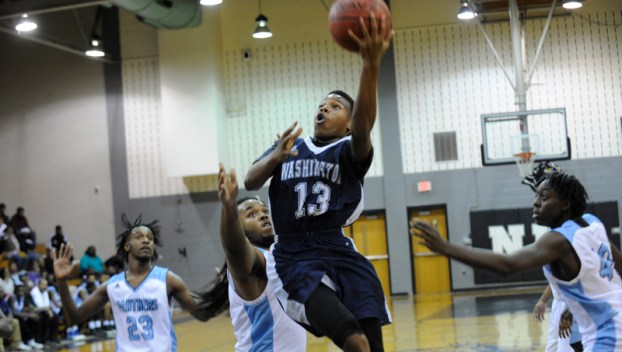 YOUNG SPARK: Freshman Terry Moore came off the bench Wednesday night to score 18 points for the Pam Pack, including nine in the fourth quarter, but it wasn’t enough to overcome Washington County. (Sean Finnerty | Daily News)

PINETOWN — A costly second quarter where the Washington boys basketball team was outscored by 12 points doomed the Pam Pack on Wednesday, as it could never recover in an 87-76 loss to Washington County in the opening game of the Northside Christmas Tournament.

Washington (2-7, 0-3 2A Eastern Carolina Conference) actually opened the game shooting well, hitting four 3-pointers — two from Omarion Blount and one each from Jamari Bryant and Terry Moore — in the opening quarter and held a 20-19 lead after the first period. But the Pam Pack went cold in the second, scoring just 10 points, while Washington County (2-0 1A Albemarle Athletic Conference) poured in 22 points to take a 41-30 lead into the halftime break.

Washington attempted to fight back, repeatedly getting to the rim, but couldn’t finish in traffic. Thanks to Bryant and Moore, who scored 12 points and nine points in the fourth quarter and finished with 22 points and 18 points, respectively, the Pam Pack scored 30 in the final period. But every time Washington cut the Panthers’ lead to 10 points, Washington County answered to maintain its healthy lead.

Blount almost sparked a miracle comeback, hitting a 3-pointer, coming up with a steal, hitting another 3-pointer and then forcing another turnover that set up a Bryant basket to cut Washington County’s lead to eight points with 1:01 remaining. But the Pam Pack air-balled its next 3-point attempt and the Panthers finished the game out.

After the game Washington head coach Lane Raper said his team needs to do a better job of creating open looks to take shots.

“Right now we’re cold from the outside,” Raper said. “Omarion (Blount) got hot there at the end, hit a couple of 3’s that got us back in it; a little fight there at the end. We’re getting some open looks, but they’re not good open looks, meaning that we’re just (making) one pass and shoot. We really need to work the ball more and have a better shooting position.”

A positive the Pam Pack can take away from the game was the play of Moore, a freshman who provided a spark off the bench with his aggressiveness driving to the basket. Half of his 18 points came in the final quarter. Raper said Moore’s play on the JV team earned the young guard a chance to show what he has at the varsity level.

“Today, he really busted out and really took over there for us and really led the offense,” Raper said. “He’s really aggressive and that’s what we need.”

The loss places Washington in the tournament’s consolation game, where it will take on Southside.

By LEIKE ABEBE For the Daily News GREENVILLE — Opening the Pitt County Holiday Tournament with a matchup against undefeated... read more