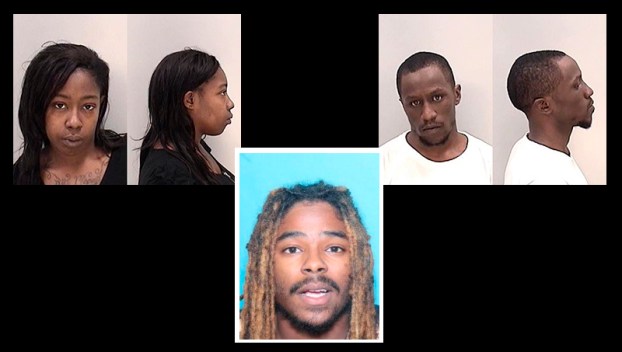 FACING CHARGES: Alicia Hassona Polen, Jayquwan Newmones and Khalif Muhammed Newmones were each charged in relation to the killing of Timothy Moore in Belhaven on Christmas Eve 2017.

TOP 10 OF 2018: Man wanted for Belhaven murder arrested in Georgia

The apprehension of a Belhaven murder suspect involving a joint law enforcement effort across state lines is one of the Top 10 stories of the year.

The body of Belhaven resident, 27-year-old Timothy Bernard Moore, was found on Christmas Eve 2017, on a dirt road just off of Beech Ridge Road in Belhaven. Moore had had not been seen since the night before. According to the autopsy report released on July 5, Moore was shot a total of 13 times, once in the head, seven times in the torso, three times in the left arm and twice in the right arm.

“I’ve been a lifelong resident of Belhaven and I’ve known the family for a long time, Timothy’s family. He’s a good guy. He was a good guy. He doesn’t deserve this; no one does,” Belhaven Mayor Ricky Credle said at the time.

Investigators with the Beaufort County Sheriff’s Office quickly narrowed their suspect search to Jayquwan Newmones, a New Jersey native who had been residing in Belhaven over the previous several months. Soon after, they also realized he’d left the area for parts unknown. Enlisting the aid of the Greenville Police Department’s Violent Criminal Apprehension Team, the search was taken up by the North Carolina SBI Fugitive and Missing Person Task Force and the FBI, eventually leading to the Augusta Police Department and the Richmond (Georgia) County Sheriff’s Office, where Newmones’ brother resided.

When he was taken into custody in Georgia on Feb. 15, law enforcement officials said the 23-year-old man had altered his appearance drastically in an effort to avoid arrest, dressing as a female for more than a week and posing as a ninth-grade high school student, according to a press release from the sheriff’s office. Newmones had also sought shelter with a family who took him in after he came to their residence asking for help, the release stated.

Newmones was charged with an open count of murder, robbery with a dangerous weapon and felony larceny of a motor vehicle. In addition to Jayquwan Newmones, two others were also taken into custody in relation to the murder. His brother, Khalif Muhammed Newmones, 25, of 252 Duke St., Belhaven, and Alicia Hassona Polen, 27, of 1903 Cooney Circle, Augusta, Georgia, were both charged with accessory after the fact to murder. According to Beaufort County Sheriff’s Office Lt. Jim Vanlandingham, the three were extradited to Beaufort County. The Newmones brothers remain in custody; Polen was released on bond. No court date has been set for trial.

“Countless hours were put into this investigation by my deputies, along with assistance from deputies, officers and agents from local, state and federal law enforcement agencies from both North Carolina and Georgia,” Beaufort County Sheriff Ernie Coleman stated in a press release at the time of the arrest. “Over 35 court orders were drafted and executed to aid in developing evidence in this case. Newmones was taken into custody without incident because of tireless effort and determination by a lot of good law enforcement officers. I know that arrests made in this case will not make the situation better, but I do hope that it brings the Moore family comfort and consolation in this time of sadness.”

The 2018 track and field season literally could not have gone any better for the Southside girls’ 4×200-meter relay team.... read more