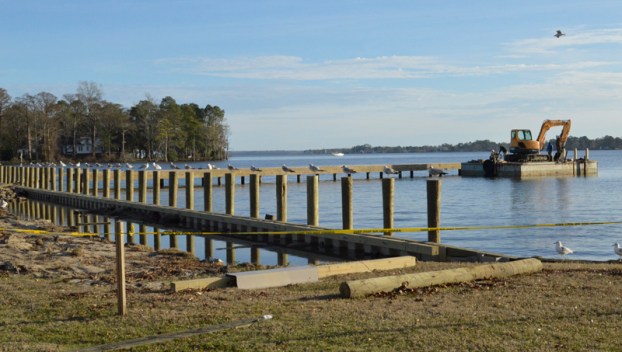 FULL STEAM AHEAD: Construction has been underway on a new fishing pier at Havens Gardens since October, after being delayed by Hurricane Florence. Here, crews from Sawyer Residential and Marine Construction work on, while the seagulls have made themselves right at home. (Matt Debnam/Daily News)

For those looking forward to some late winter/early spring fishing, there’s good news on the horizon. Work continues on Havens Gardens pier in Washington with an anticipated completion sometime in the next month.

“The completion date, we’re anticipating to be mid-February,” Washington City Manager Jonathan Russell said. “They had some delays initially, but things have been moving along nicely on it.”

Russell said the project could be completed sooner if the weather is cooperative. While the contract for the pier was awarded in July, Hurricane Florence delayed construction substantially, pushing the start date on the project into October. Since then, construction has continued through the winter months. Sawyer Residential and Marine Construction was selected to handle construction after placing a bid of $84,000 to complete the project. A second bid for $97,450 was also considered.

While the city had allotted funds for the project in its 2017-18 budget, an $83,700 grant from the Coastal Area Management Act’s public access program is helping foot the bill, with the city paying $16,425 toward the project.

The idea of a new pier at the park dates back a number of years and is part of an ongoing effort to improve the space. In 2016, the city unveiled new playground equipment at the site, including equipment designed to be inclusive for children with disabilities.

The old pier, which has been demolished during the process, stood at Havens Gardens for more than 30 years. The new pier, the specifications for which were developed by Jarvis Consulting, will provide better handicap accessibility, with guardrails in compliance with the Americans with Disabilities Act.

Another improvement scheduled for at Havens Gardens this year is the installation of a new kayak launch on the other side of Park Drive at the public access boat ramp. Like the pier, the launch, along with another at Mason’s Landing on the west side of town, will serve to provide handicap accessibility to the Pamlico River.

Last year, the Washington City Council made a major change in how it sets goals and priorities for the city,... read more