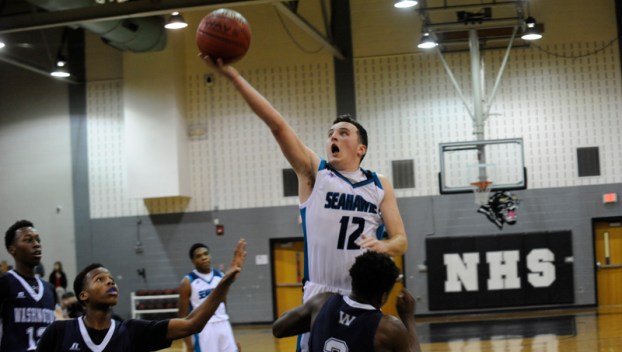 FINGER ROLL: Seahawk Kevin White extends to finish at the basket against Washington in the Northside Christmas Tournament earlier this season. White and his Southside teammates returned from Christmas break with a 75-44 loss to Jones Senior on Friday. (Sean Finnerty | Daily News)

CHOCOWINITY — Southside was doomed by Jones Senior’s hot shooting from behind the arc in a 75-44 loss at home in what was an emotional Friday night, as the Seahawks remembered and honored the late Donshae Miller in a pregame ceremony.

One of the great players in Southside’s history as both a basketball and football player, Miller was honored before the boys’ game Friday night. Seahawks head coach Sean White held back tears as he announced that Miller’s No. 23 jersey is retired and will never be worn again. White also shared a memory of when Miller scored his 1000th point with the Seahawks on a signature 3-point shot against cross-county rival Northside in his senior season. The Miller family was given a commemorative Southside football jersey and basketball.

“He played for me for four years, two on JV, two on varsity,” Southside head football coach Jeff Carrow said. “We did have some disagreements when I became head coach, but he grew into an incredible man and he made me a better coach and person. He ended up as a captain and did everything right for this program. He was a heck of an athlete and one of the best I’ve ever coached. He was an outstanding kid and this community certainly misses him.” 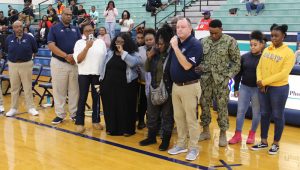 As for the game that followed, it was a back-and-forth first quarter between Southside (3-5, 0-1 1A Coastal Plains Conference) and Jones Senior (2-9, 1-3 1A CPC). While the Trojans led, 17-16, after the opening eight minutes, Jones Senior came out hot to start the second. The Trojans outscored the Seahawks 20-7 to take a 12-point lead into the halftime break. A mixture of hot 3-point shooting and offensive rebounding led to the Trojans’ success.

Jones Senior added to its lead in the third quarter, as the Trojans, who hit 10 of 19 3-pointers on the night, continued to stay hot from long range. Unable to keep up with the pace and athleticism of the Trojans, Southside faced a 21-pont deficit heading into the final quarter. The fourth period featured more of the same and what was a close game early ended in a 31-point blowout loss for the home team.

Jalen Kirkman led the way for the Seahawks with 14 points and Ty Smith added 8 points. The Trojans were led by the hot shooting of Detorian Brown, who led all scorers with 31 points. Xavier Pegeus also chipped in with 12 points for Jones Senior.

Opening conference play with a poor performance, White said his team needs to find its rhythm again after coming back from Christmas break in order to keep up in a competitive conference.

“In this league, you have to play well every night,” an emotional White said after the game. “We were excited about this game after our showing in the holiday tournament. However, we shot terribly from the field and from the free throw line. We have to get back into the flow of the basketball season and we have a tough week coming up. Riverside and Tarboro are both excellent teams and we want to be focused for those games.”

Miller was on the mind of White as the night went on. The ceremony was filled with emotion and the players went up to give hugs to the Miller family before the game started. Overall, the night was bigger than just a game of basketball, as White reminisced about Miller.

“Donshae felt like a son to me,” White added. “That’s the way I feel about all of my players and you have a great relationship with the players. He was different because he was a great player. He’d calm me down when I got upset during games. If he got upset, he showed it by playing harder. He was a humble and polite young man. I’m glad I had the pleasure of coaching him for years, Personally, he meant the world to me, to this school and to this community.”

Still looking for its first conference win, Southside heads to Riverside today to take on the Knights at 7:30 p.m.

By LAIEKE ABEBE For the Daily News CHOCOWINITY — Thanks to a stellar defensive effort in the second half, the... read more