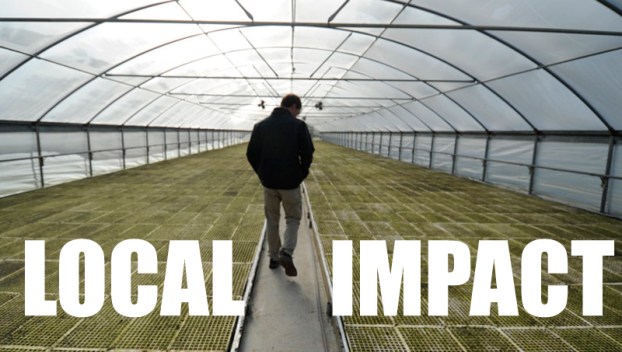 AGRICULTURAL IMPACT: Local farmers seeking access to federal loans and emergency disaster funds through the state are at an impasse during the federal shutdown, with the Beaufort-Hyde Farm Service Agency closed. (Vail Stewart Rumley/Daily News)

As of Saturday, the shutdown of the federal government has lasted 22 days, the longest ever in the history of the United States. For approximately 800,000 federal employees impacted by the shutdown, that meant a missed paycheck this week. While many programs and services have found funding sources for the month of January and beyond, one thing remains clear — the longer the shutdown continues, the greater the impact will be, in Beaufort County and beyond.

At the agricultural service offices located on Airport Drive in Washington, local farmers can see the impact of the shutdown. The Beaufort-Hyde Farm Service Agency is closed, while the Beaufort County Soil and Water Conservation office and Beaufort County Cooperative Extension Service remain open.

“Farmers in eastern North Carolina interact with their FSA office on a pretty regular basis,” said N.C. Department of Agriculture Chief Deputy Commissioner David Smith. “They’re going there to get access to information, loans, programs, records and so forth. By not being able to go into those offices, all of that is put on hold for now.”

“Many of those farmers were able to get that information and upload it to our application process before the federal government shut down,” David Smith said. “Unfortunately, some have not, so they’ve run up against this wall that they can’t move past until the office reopens.”

At Soil and Water offices statewide, which also house federal Natural Resource Conservation Service employees, access to some federal programs is also at a standstill. 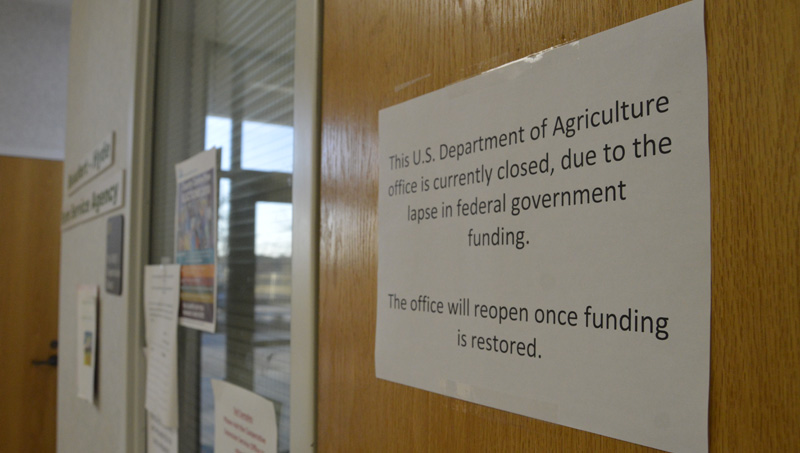 CLOSED: A sign hangs on the door shared by the Beaufort-Hyde Farm Service Agency and the Beaufort County Soil and Water Conservation office. While the FSA is closed during the government shutdown, the county-funded Soil and Water office and the N.C. Cooperative Extension Service remain open. (Matt Debnam/Daily News)

As the shutdown enters its fifth week on Monday, county officials say services to local residents will continue as usual for the time being. If a compromise is not reached by February, however, some of those federal services and programs may be suspended due to a lack of funding.

“At this time, we have not seen any impacts at Social Services,” Beaufort County DSS Director Melanie Corprew wrote in an email. “However, if the shutdown lingers for weeks or months, that could change.”

According to an email from Susan Manning, principal deputy secretary with the N.C. Department of Health and Human Services, those who are currently depending on federal services for food and nutrition supplements and temporary family aid should still be able to receive those services through at least part of February. Funding for childcare subsidies is covered for the next few months.

A press release from the U.S. Department of Agriculture on Tuesday states that the agency will work with states to ensure February nutrition benefits are delivered. The February benefits will likely come earlier than usual, sometime towards the end of January.

“Our access to some of our expert partners at HUD (U.S. Department of Housing and Urban Development) and SBA (The U.S. Small Business Administration) is somewhat limited during the shutdown because some of those people are not working,” Acree said.

Likewise, Community Development Block Grant monies related to Hurricane Florence cannot be dispersed to local communities until rules are written in the federal register. Most FEMA operations will continue during the shutdown, since they are largely funded by the FEMA’s disaster relief fund. Disaster loan assistance through SBA is still available online.

At U.S. Coast Guard Station Hobucken, operations continue as normal during the shutdown, according to Officer in Charge Nathan Jones. Coast Guard personnel continue to monitor VHF Channel 16, should anyone on the water need assistance.

“We are still staying fully staffed and responding to all types of incidents on the water,” Jones said. “There are a few we have cut back, but as far as responding to mariners that need assistance, we are 100 percent going to respond and will still maintain and be staffed 24 hours a day, seven days a week.”

While many of the Coast Guard’s civilian personnel have been furloughed during the shutdown, nationally, approximately 41,000 active duty members are still at work without pay until the shutdown ends.

Though the N.C. Division of Marine Fisheries is mostly unimpacted during the shutdown, the agency does receive some funding from federal sources. According to DMF Public Information Officer Tricia Smith, programs involving sport fish restoration, water quality testing and marine mammal protection all receive federal dollars, but are funded through the year or supplemented by federal excise taxes.

A survey of the state’s fishing industry after Hurricane Florence to evaluate the need for federal fishery disaster assistance continues unimpeded, as the National Oceanic and Atmospheric Administration had contracted with the University of Florida to conduct the survey prior to the shutdown.

“The division routinely works with federal partners on numerous monitoring and regulatory issues,” Tricia Smith wrote in an email. “Since federal employees are not at work, the division cannot say with certainty that there are no impacts due to the shutdown.”

While Beaufort County itself is not home to a National Wildlife Refuge, there are five such pieces of land in surrounding counties on the peninsula between the Pamlico and Albemarle Rivers.

Lake Mattamuskeet, Swan Quarter, Alligator River, Pocosin Lakes and Roanoke River National wildlife refuges remain open to the public in areas where access does not require the presence of a federal employee. The same activities that were allowed on the refuge are still allowed, including those under a permit issued before the shutdown. Entry onto the refuge is at the visitor’s own risk. Access to Waterfowl Production Areas remains open.