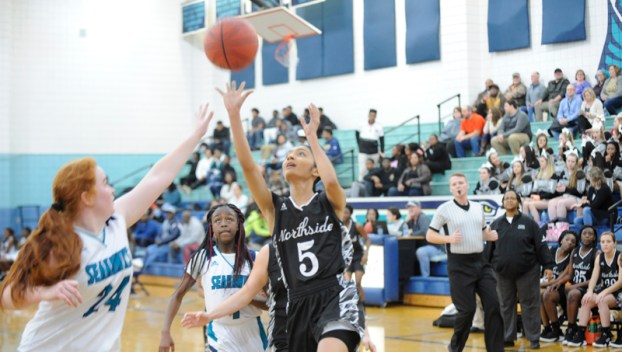 SHOOTING UNDER PRESSURE: Gabby Slade puts up a shot as Delaney Ayers slides over to contest during the second half of Northside’s win over Southside on Friday. (Sean Finnerty | Daily News)

Northside’s dominance on the boards, steals lead to victory over Southside

CHOCOWINITY — Though only having a single-digit lead after both the first and second quarters, the Northside girls basketball team ratcheted up its already strong defensive play in the second half to pull away at Southside and bring home a 51-38 victory Friday.

In a turnover-filled game, Katie Godley and Alexia Somers powered the Panthers by grabbing offensive rebounds, proving to be the difference makers in the contest.

“(At halftime) I told them to slow the ball down, but when we get the opportunity, push the ball up to try and score,” Northside head coach Michelle Leathers said. “We’ve been working on offensive rebounds and boxing out the last couple of days and making sure we follow the ball. A lot of the times they look at the rim and don’t chase the ball, so we have really been working on that.”

Godley made it look easy as she ripped balls away from her opponents before a jump ball could be called and either finding a teammate with an outlet pass or drawing a foul to get to the free-throw line. The score sheet doesn’t show it, as she converted just one free throw and finished the game with one point, but Godley was an assist machine to the team’s leading scorers Jessica Foster and Gabby Slade, who finished with 13 and nine points, respectively. Somers not only had the rebounds, but the open-court steals as well to gain extra possessions, finishing with six points on the night.

Southside’s (4-5, 1-3 1A Coastal Plains Conference) leading scorer, Shantel Cannon, finished with 17 points and helped get her team into the bonus early in the second quarter. However, the Seahawks missed opportunities from the charity stripe and found themselves playing from behind all 32 minutes. After Northside (4-4, 2-2 1A CPC) won the tip, the first points of the game came courtesy of a Northside offensive rebound, and the closest Southside ever came to the Panthers was three points (twice).

What really hurt the Seahawks was all of their turnovers. Southside gifted the ball to Northside 31 times on the night, while only coming away with seven steals. The Seahawks usually jumpstart their offense through turnovers and scoring easy points in transition, but they weren’t able to do so against Northside.

“We didn’t come to play ball tonight,” Southside head coach Milton Ruffin said. “We had too many turnovers and we got out-hustled. They got all the loose balls and we just didn’t come to play tonight. We just didn’t do the things we practiced this week, too many turnovers. We had too many uncontested turnovers (too), just turning around and throwing the ball away. In the end it just gave them (Northside) too many shots at the goal.”

The Panthers frequently went back into a half court man or zone and didn’t press every possession toward the end of the second quarter, creating uncertainty for Southside that eventually allowed them to put the game out of reach. The Seahawks’ miscues started coming from all angles once Northside got its system in place: the inbounds pass, the force to the post player on the foul line, the misread play calls and the continued turnovers.

With exams this week, neither team plays again until Friday. Southside will host South Creek, while Northside will welcome Jones Senior to Pinetown.

WASHINGTON — After a sluggish start on Wednesday, Washington found its rhythm in the third quarter, exploding for 28 points... read more