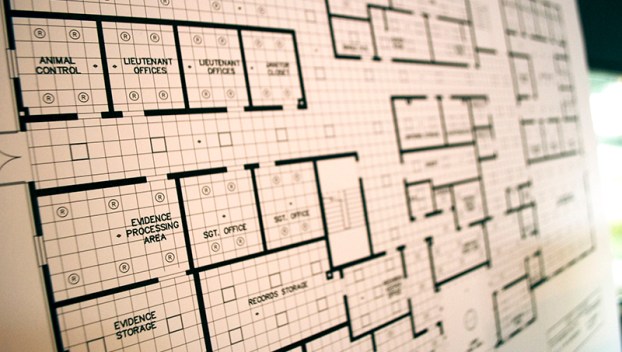 IN THE WORKS: The City of Washington plans to close on the property for a new police station in the coming months. Shown are the plans previously proposed for the new station. (Daily News)

City to close on new property for police station

The Washington Police Department will have a new home a few blocks down from its old address on Third Street, after the Washington City Council voted unanimously to purchase a 3.7-acre site at the corner of Third and Bridge streets that once housed a Dr. Pepper bottling plant.

Currently, the property is enrolled in the federal Brownfields program, which helps mitigate environmental hazards. The city has performed an environmental study on the property as a part of its due diligence in the purchase. The site has been a topic of discussion for two years, and a new police station has been on the city’s radar for the past decade. When the old station was flooded during Hurricane Florence, the need for a new station came to the forefront.

Russell said the plan for the site had been previously developed by Antebellum Architecture & Design and will likely guide the new building’s development, with a few minor tweaks.

The property is currently owned by Washington Center LLC, a company based in Sausalito, California. While the tax value of the property in question is listed at $400,595, the sale price of the property has not yet been disclosed, but will be public record after closing. Russell said the closing is anticipated to take place in the next two months.

“I think it is a great thing that the city decided to vote to purchase this property to build a new police station.” Washington Police-Fire-EMS Services Director Stacy Drakeford said. “Since the last one was built in 1975, the department has outgrown that facility. We will now be able to be a department that is able to meet the standards of 21st century policing.”

The WPD is temporarily housed in a rented building on John Small Avenue/U.S. Highway 264.

During its meeting Thursday night, the Washington Board of Adjustment will consider issuing a special-use permit and a variance to... read more