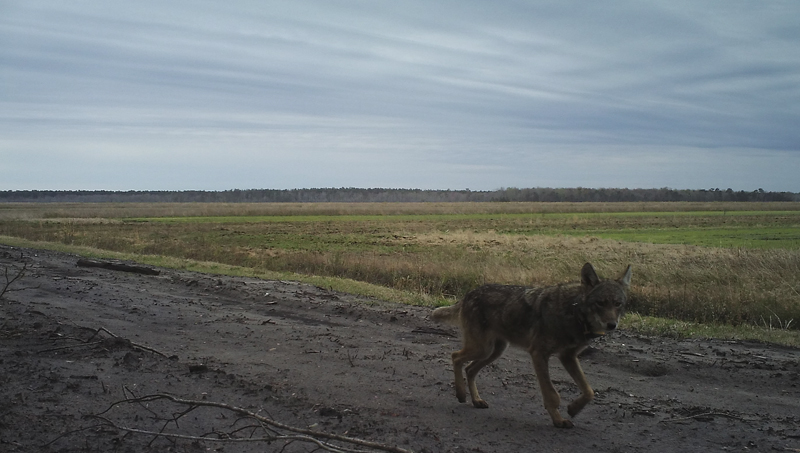 LISTENING IN: A red wolf is captured by a trail cam, one of many operated by Wildlands Network. It’s believed that only 30-40 red wolves still live in the wild — the only wild population in the U.S. is located in northeastern North Carolina. (Wildlands Network)

The meeting is designed to provide Hyde County residents with a chance to describe their actual experiences (positive and negative) with living with the federal red wolf reintroduction program, and to seek local ideas for improving the program in the future.

The listening session will be held at the Hyde County Davis Center at 33478 U.S. Highway 264 in Engelhard, from 9 to 11 a.m. Free breakfast will be served for all those who RSVP ahead of time to Carly Creef-Alexander (carly@wildlandsnetwork.org). Also, a drawing will be held at the meeting for attendees, with more than $500 in valuable door prizes being awarded, such as gift certificates to bed and breakfasts, local hardware stores and restaurants. A second listening session is scheduled for Feb. 23 in Columbia for Tyrrell County residents.

According to Creef-Alexander, coastal plain conservationist for Wildlands Network and a native of Manns Harbor, “We’re very excited to host this listening session so we can hear directly from local residents about how the red wolf recovery program could be improved to better promote coexistence between humans and wild canines. We’re also eager to share the news about our new trail camera loan program for landowners in this area, so that we can work hand-in-hand with property owners to document trends in wildlife abundance in the red wolf recovery area.”

Red wolves were reintroduced to the Albemarle Peninsula beginning in 1987, as part of an effort by the U.S. Fish and Wildlife Service to recover the extremely rare species and save it from extinction. The red wolf population grew for a number of years, reaching a peak of 150 animals in 2006, before declining sharply since 2012 due to an apparent increase in gunshot mortality. At present, only 30-40 red wolves are believed to remain in the wild, all in northeastern North Carolina.

Wildlands Network has run an ambitious camera trapping program inside the red wolf recovery area since 2015, with more than 20 cameras placed at Alligator River and Pocosin Lakes National Wildlife Refuges and some additional tracts of private land. The organization now seeks to recruit local private landowners to participate in the project by hosting trail cameras on their property for a period of weeks or months. Interested landowners who can’t make the listening session can contact Carly for more information, and the public is invited to view all of the pictures collected so far during the project at www.flickr.com/photos/redwolfreality/albums.

It’s time to put the brakes on