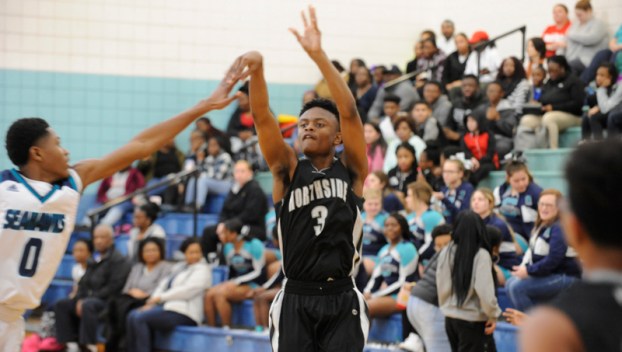 FROM DOWNTOWN: Rashod Smith lets fly from behind the arc against Southside last week. Smith scored 22 points in the win, a bit short the 27.4 points he’s averaging per game this season. (Sean Finnerty | Daily News)

Roughly halfway through the high school basketball season, play stopped this week for exams, also allowing teams to regroup before play resumes tomorrow. Plenty has occurred through the first month and a half of the season.

Northside, perhaps the most exciting team in Beaufort County, is also the only team in the area with a winning record at 7-4, and has gone toe to toe in losses to talented and undefeated squads Farmville Central and Washington County. The Lady Panthers have had an up-and-down season so far, but defeated rival Southside right before the break and look set to battle Tarboro for third in the conference.

Pam Pack fans have plenty to be happy about this season. After winning just one game last year, the boys have already racked up five victories this season, including their first conference win since 2017. After a rough start the Lady Pam Pack is on a better track as well, having won its past four games.

Due to youth and lack of experience, this season was always going to be tough for both Southside’s boys and girls team. The Lady Seahawks have no seniors and just two juniors, while the boys team has just three players with prior varsity experience. The Southside girls team has been up and down this year and lost its last two games before the break, but returns tomorrow with a home game against 2-10 South Creek. The boys are still chasing their first conference win in a tough 1A Coastal Plains Conference.

Here are the individual standouts from the first half of the season:

After a stellar year as a sophomore last season, Rashod Smith has upped his game as a junior, cementing his status as one of the best players in the 1A CPC — as well as Beaufort County. Smith has lit up basically every team he has faced, as he’s averaging 27.4 points, 6.8 assists and 3.4 steals through 11 games so far.

Being able to both get to the basket at will and pull up from behind the arc keeps defenders guessing, while his defensive intensity helps create turnovers and puts the Panthers in transition — which is when they are at their most dangerous and exciting. Just 13 points shy of 1,000 career points, Smith will most assuredly accomplish the feat tomorrow at home against Jones Senior.

Unfortunately for Northside’s opponents, Smith isn’t the Panthers’ only playmaker capable of highlight-reel plays. Johnathan Clark, equally adept at running the offense, shares ball-handling duties with Smith, meaning other teams never get to pause and take a breath when Smith goes to the bench.

Averaging 20.0 points, 6.4 rebounds, 3.3 assists and 2.4 steals so far, Clark affects the game in a myriad of ways, from using his athleticism to attack the basket, wow the crowd with no-look passes in transition or hounding opposing ball-handlers into turnovers.

Clark also provided the highlight of the season so far, when he threw down a one-handed alley-oop he caught off the backboard from Zach Green’s pass. Northside head coach Jared Adams said it was the most impressive play he’s seen in his time at Northside, including when current Miami Heat player Bam Adebayo was a Panther.

Starting out the season 2-6, the Lady Pam Pack hasn’t lost since Dec. 19, and leading the charge for Washington is senior Daria Jones. The turnaround for the Lady Pam Pack started in the Pitt County Holiday Tournament, where Washington won its final two games to kick-start the win streak, and Jones was named to the all-tournament team after dominating the offensive glass and scoring key points in crunch time.

Jones continued her strong play when play resumed after the holiday break, scoring 17 points in both wins over North Pitt and South Lenoir. Not only did Jones lead her team in scoring both games, but also the bulk of her points in both contests came in the second half and propelled Washington to victory.