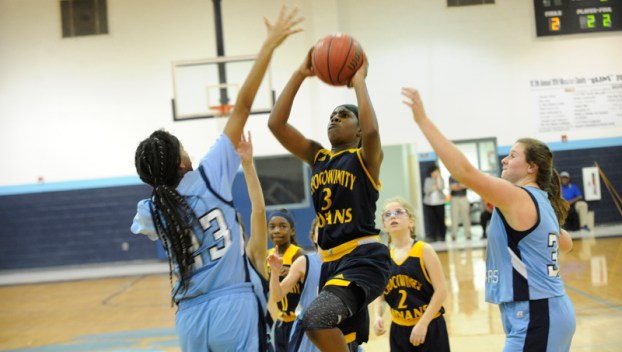 HIGH-SCORER: Chocowinity’s Ka’Nyah O’Neal goes up for a shot during a win over Northeast earlier this season. O’Neal led the way for the Indians against Bath on Wednesday, scoring 31 points in the win over the Pirates. (Sean Finnerty | Daily News)

Chocowinity girls pull away in second half to defeat Bath

CHOCOWINITY — It was the battle of players wearing No. 3 leading their respective teams Wednesday, as Bath’s Hannah Baker scored 22 points and Chocowinity’s Ka’Nyah O’Neal scored 31 points for the Indians in Chocowinity’s 41-29 win at home.

The teams found themselves tied at 20 at the half before the Indian’s O’Neal and De’Najah Warren combined to score 12 points in the third quarter. The duo also helped hold the Pirates to nine points the entire second half, with just two coming in the final quarter.

“The Chocowinity girls are very talented and Ka’Nyah is a great basketball player,” Bath head coach Tony Mirabella said. “My girls played with heart and had a tie game at halftime. They played a good game and am proud of them for sticking in and playing hard.”

A back-and-forth first half filled with fouls, turnovers and breakaways made it look like Bath was handling the dominant play of O’Neal, who has been Chocowinity’s leading scorer this season. After allowing her to go 6-for-8 at the charity stripe in the first quarter, the Pirates forced O’Neal to the outside and forced her to make contested shots or pass the ball off to a teammate.

“It just came down to at halftime, whoever could make their free throws. We spent all day yesterday working on our press and picking up full court and making sure our girls can rotate in the right positions. Bath does a good job rebounding so we just focused on getting back and picking up on defense,” Chocowinity head coach Greg Hombirg said.

Baker kept pace and was determined to not be outdone by O’Neal. She shined on the scoresheet, getting many of her points on fast break layups, but also had her fair share of contested shots. What won’t show up on the score sheet is the impact Baker had on inbounds plays and timeout huddles. Her input to adjust the inbounds pass and her leadership in helping double-team O’Neal helped keep the Pirates in the game.

“We’re a good fast break team, that’s kind of where we excel at,” Mirabella said. “Hannah Baker had a great game. She had 22 of our points and she is just a great athlete and a great player. Her leadership and help leading the team has been evident her eighth grade year.”

While O’Neal led the charge for the Indians, she received support from Warren and D.J. Jones, who scored eight and two points, respectively. For Bath, Lauren Rouse contributed with three points, and Hannah Black and Karley Harris both chipped in with two points.