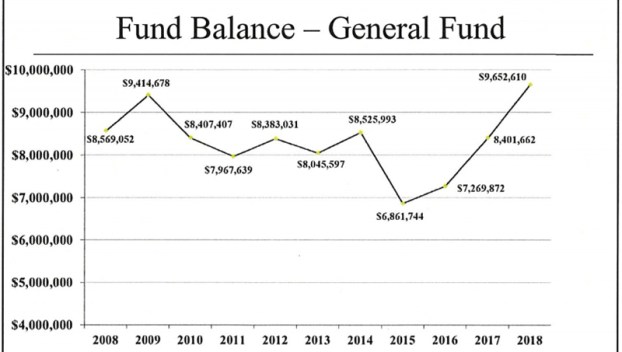 STRONG TREND: For the past three years, the city of Washington has seen a steady increase in its fund balance, allowing the city to respond to emergencies, manage its cash flow and not incur large debts for sizable projects. (City of Washington)

The City of Washington’s financial health is on good foundations, according to an audit report presented to city council by Martin, Starnes and Associates on Tuesday evening. A clean audit, declining debt and a growing fund balance are three good indicators of the city’s finances, according to Washington Chief Financial Officer Matt Rauschenbach.

In an audit, no findings are good findings. In essence, an audit with no findings indicates that the city’s financials were reported accurately and in compliance with all the standards that govern them.

“Our practices and procedures were fairly stated in the financials,” Rauschenbach said. “They call it a clean audit. Everything was documented and approved appropriately according to state statute as well as governmental accounting standards and our internal policies.”

“In the plan, we had appropriated fund balance to balance the budget of a half a million dollars,” Rauschenbach said. “You have to take that as a negative against the $1.8 million, so that’s where you get the $1.3 million.”

Property taxes, sales tax and interest income exceeded budget by a total of $306,000, while expenditures in general government, public safety, transportation, culture and recreation came in a combined total of $1.2 million under budget. Altogether, these funds fall into the fund balance, which acts as the city’s reserve fund, and can be used for a number of purposes.

For one, it helps the municipality to respond quickly during disasters. Following hurricane Irene, Rauschenbach says that the city spent $1.8 million on response — Florence this past fall cost the city approximately $900,000. While much of the money spent during disasters can be recovered through the federal government, that process can take years. Having the money on hand in a fund balance allows for a quick response without considerable financial strain.

In addition to $2 million that the state treasurer’s office recommends keeping on hand, the city has also set a policy of keeping an additional $2 million on hand specifically for natural disasters.

Another area where the fund balance has helped Washington is in its debt service and day-to-day cash flow. With property taxes coming in once a year, the fund balance can help cover gaps in operations.

As of this year’s audit, Washington’s outstanding debt was sitting at $221,000, a relatively low amount. Rauschenbach says the city has formally adopted a pay-as-you-go philosophy for big-ticket capital items, which keeps the city from incurring debt.

“The city staff do an excellent job of managing and beating their budgets given limited resources,” Rauschenbach said. “The rise in fund balance is our big scorecard. That shows the result of those efforts.”

It’s a conundrum faced by many growing cities — should the focus be on space for cars or space for... read more