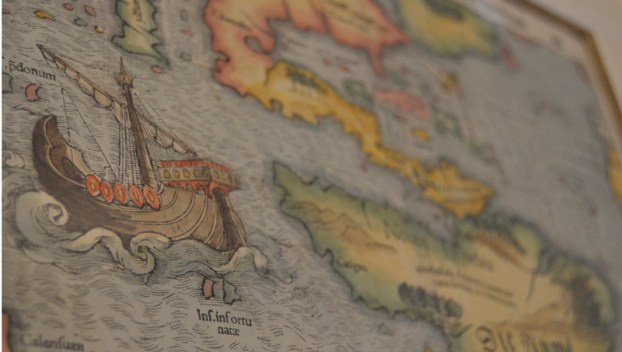 TERRA NOVA: The oldest map in the exhibit, this map by German cartographer Sebastian Münster dates to 1540 and is the first known map to depict both American continents in their entirety. It was created based on notes from the voyages of Italian explorer Giovanni da Verrazzano. (Matt Debnam/Daily News)

From the earliest days of human civilization, maps have helped humans understand their place in the world. At the Historic Bath Exhibit Center, from now through June, an exhibit of maps dating from the 16th to 19th centuries will allow visitors to establish a better sense of North Carolina’s geography and place in history. 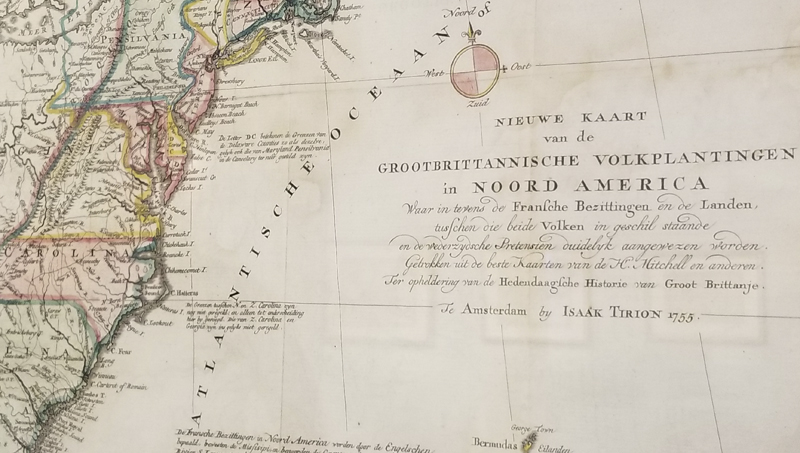 COLONIES: A 1755 map of North America by Isaak Tirion shows political boundaries of the American colonies, as well as lands west of the Appalachian Mountains. (Matt Debnam/Daily News)

The collection of 29 antique maps were donated to the historic site by Gene Roberts, a Bath resident and avid collector of antiques. For those looking back from the 21st century, the collection tells important stories — stories of exploration, North Carolina’s Native American heritage, settlement and political divisions.

From the earliest to the latest maps in the collection, viewers will notice tremendous differences. In the earliest maps, significant features such as rivers, islands and landmasses are exaggerated in scale and somewhat distorted from how we now know them to be. In essence, cartographers of the era were doing their best with the tools and technology available. 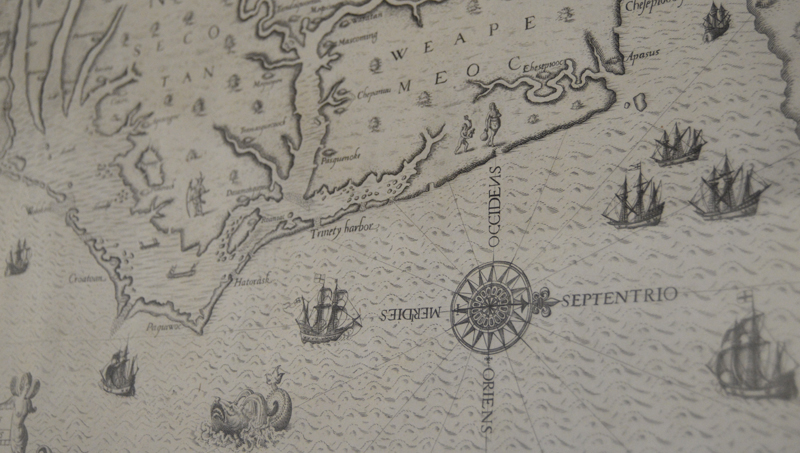 A MAP OF VIRGINIA: Students of North Carolina history might recognize this 1590 map by John White from textbooks. Depicting the region from Cape Lookout to the Chesapeake, stylized drawings and place names speak to the area’s Native American ancestry. (Matt Debnam/Daily News)

“If you look at the coastlines, their idea of how things are is extrapolated,” Umfleet said. “They didn’t have anyone out there measuring while they were doing it.”

By the time of the most recent maps, created in the mid-1800s, the science of cartography had advanced greatly, as had knowledge of the state’s geography. Surveyors had walked and measured the land. Political boundaries between states and counties became more sharply defined. Longitude and latitude was measured more precisely, from the degree down to the minute and second. 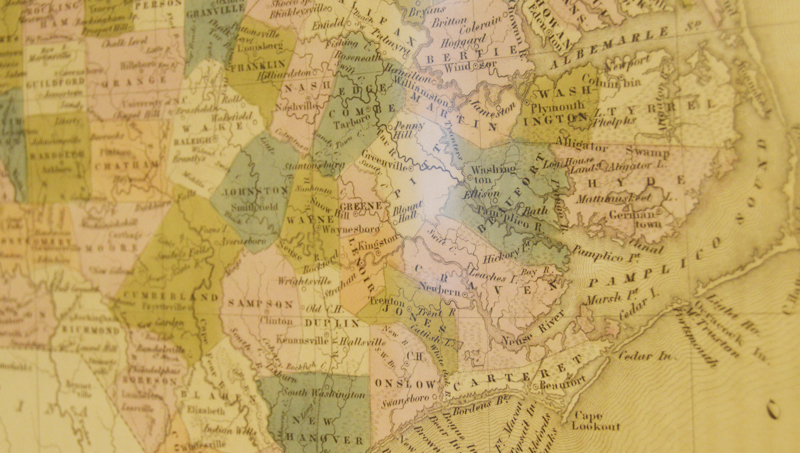 MODERN MAP: By the time this map of North Carolina was produced in 1840s, present day counties were becoming more recognizable and defined as cartography and surveying advanced. (Matt Debnam/Daily News)

“Once you start having the minutes and seconds for your latitude and longitude, you’re able to take your idea of what an area was and start getting to the granular level,” Umfleet said.

In the past 20 years, physical paper maps have been pushed into obsolescence by technological advances such as global positioning systems. Even with the prevalence of digital cartography, being able to read a map remains a critical skill when screens go dark. For those who came before, however, having a good map could mean the difference between life and death.

“Historically, they marked down where good water sources were, where good hunting was, where there were safe villages and tribes that would be safe to trade with.” Umfleet explained. “Over time, it went from not just a geographical sense, but what’s safe, where you can go and what the best place is to get something.”

While the walls are currently packed with maps, Umfleet says he hopes to add to the exhibit in the coming months. Surveying equipment, both antique and modern, will offer a look at how maps were made both then and now. Another piece he hopes to add is a ship’s table to explain the tools used for nautical navigation.

The Bath State Historic Site is open Tuesdays through Saturdays from 9 a.m. to 5 p.m. For more information, visit historicsites.nc.gov/all-sites/historic-bath or call 252-923-3971.

Bibliophiles rejoice! Next week marks the beginning of the biggest book sale of the year for Beaufort County, and whether... read more