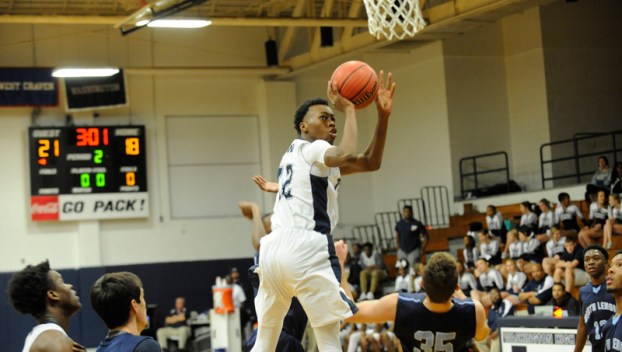 AND-ONE: Jamauri Bryant adjusts his shot in midair after being fouled during the Pam Pack’s 62-40 win over South Lenoir earlier this season. Bryant led Washington with 21 points on Friday, but it wasn't enough to take down Kinston. (Sean Finnerty | Daily News)

KINSTON — Riding a three-game win streak and fresh off of its first conference win in two years, the Washington boys basketball team met its match in Kinston Friday night, falling to the Vikings, 101-74.

The Pam Pack (5-8, 1-4 2A Eastern Carolina Conference) kept it close through the first quarter, trailing only 18-15 after the first eight minutes. But Kinston (11-5, 3-2 2A ECC) found its groove in the second, scoring 29 points to take a 47-32 lead into the break. Washington fell apart in the third, scoring just eight points while allowing 28. Washington responded with 34 points in the fourth, but it was too little, too late.

Jamauri Bryant led the Pam Pack with 21 points, Jeremee Bryant finished with 17, Omarion Blount chipped in with 14 points and Jordi Barnes contributed with 10.

Washington hosts West Craven tonight in search of its second conference win of the season.

KINSTON — With its four-game win streak Washington might’ve been the hottest team in Beaufort County, but the Vikings put and end to the Pam Pack’s winning ways, defeating Washington, 65-39, Friday night.

Reagan Ruther led Washington with 14 points, but unfortunately for the Lady Pam Pack, she was the only Washington player in double-figures. Daria Jones was limited to eight points, while Kizoria Redmond scored five and Kiair Boomer and Briasia Somerville both finished with four points.

Washington will look to get back to its winning ways when it hosts West Craven tonight.

CHOCOWINITY — Looking for its first conference win of the season, the Southside boys basketball team rallied to tie South Creek in the final seconds of the game only to see the Cougars nail their free throws in a 68-64 Seahawk loss Friday night.

Southside (3-9, 0-5 1A Coastal Plains Conference) was the definition of inconsistent against South Creek (1-12, 1-4 1A CPC), scoring in single digits in the first and third quarters, but scoring 24 and 26 points in the second and fourth quarters, respectively.

Trailing 53-18 heading into the fourth quarter, the Seahawks battled all the way back to tie the score at 64 with 0:08 left in the game, thanks to a Sion Kinlaw basket. But unfortunately for Southside, the Trojans, who had already missed 27 free throws in the game, sank four of them in the final seconds to come away with their first win of the season.

After playing Pamlico County last night, Southside next plays tomorrow, when it travels to Bear Grass.

CHOCOWINITY — Thanks to a strong defensive effort that included holding South Creek to just two points in the fourth quarter, Southside took down the Cougars, 51-18, at home Friday night.

Southside (5-5, 2-3 1A CPC) held South Creek (2-12, 0-5 1A CPC) to just six baskets all night, with the rest of the Cougars’ points coming from the free-throw line. Part of the Seahawks’ success were the 25 steals they had, which they then often turned into layups on the other end.

Shantel paced Southside, finishing with 15 points and six steals, both team-highs. Taje Speller added 11 points and three assists, while Jasmine Blango did her part with 10 points and five steals.

PINETOWN — Thanks to a balanced offense and stingy defense, Northside came away with a 57-38 win over Jones Senior at home Friday night.

With three players in double figures and two more just shy of 10 points, Northside (5-4, 3-2 1A CPC) had too much for the Jones Senior Trojans (1-12, 1-5 1A CPC), who didn’t surpass the 30-point mark until the final quarter. Forwards Ve’Era Holloway and Alexia Somers led the Panthers with 11 points each, while Gabby Slade chipped in with 10. Prentiss Thomas finished with nine points and Jessica Foster scored eight points.

Northside led by only a point after the first quarter, but expanded its lead to 26-16 by halftime. The Panthers put the game out of doubt in the third by scoring 22 points to take a 48-25 lead into the final quarter.

Northside returns to action tonight with a game at Washington County.