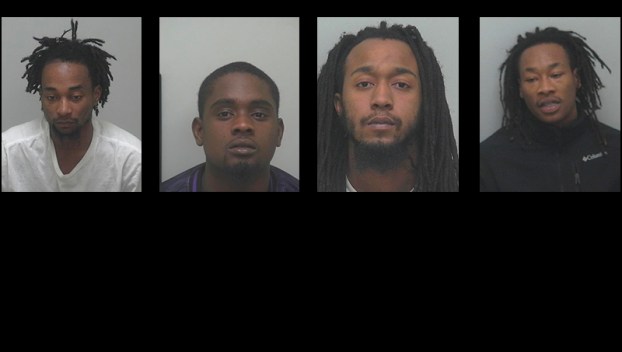 Four charged in home break in on N.C. 32

The Beaufort County Sheriff’s Office has apprehended and charged four men in relation to an overnight home break in that took place earlier this month. Deputies were called to the scene in the 8600 block of N.C. Highway 32 at around 3:40 a.m. on Jan. 8, and learned that two TVs, an iPad and a gun had been stolen from the home.

According to BCSO Lt. Jim Vanlandingham, the homeowner was not present at the time of the break in, but was familiar with the suspects and the vehicle they were driving.

“The car had actually been to his house previously that evening,” Vanlandingham said. “There were several people at the house, I think partying, so he suspected whoever was in the vehicle might have had something to do with it and gave us that description.”

After a description of the vehicle was broadcast to all law enforcement in the area, a Belhaven police officer spotted and stopped the vehicle a short time later. While three passengers fled the scene, the officer was able to detain Kentrell Telhrone Washington, 22, of Washington. According to the release, two TVs and a firearm were in plain sight in the car.

Once BSCO deputies arrived on scene, Washington was charged with breaking and entering, larceny after breaking and entering, larceny of a firearm and possession of firearm by a felon, as well as several drug charges related to cocaine, marijuana and prescription pills found in the vehicle. The vehicle itself did not belong to any of the four men, but was registered to the mother of Washington’s child, according to Vanlandingham.

Washington had previously served six months in prison in 2017 for a prior larceny after breaking and entering charge, with his parole had ending in September 2018. He was ordered to be held in the Beaufort County Detention Center on a $60,000 bond and has since been released.

On Jan. 17, after conducting interviews and processing evidence from the car, BCSO deputies arrested the three men believed to have fled the traffic stop in Belhaven.

All three were ordered held on secured bonds ranging from $32,000 to $50,000. Peele and Stanley have since been released, while Smith Jr. is still in custody. It is unknown if Washington, Stanley or Smith Jr. have retained attorneys. Peele will be appointed an attorney through the public defender’s office.

Ninety years ago this month, one of the United States’ most influential civil rights leaders was born in Atlanta, Georgia.... read more