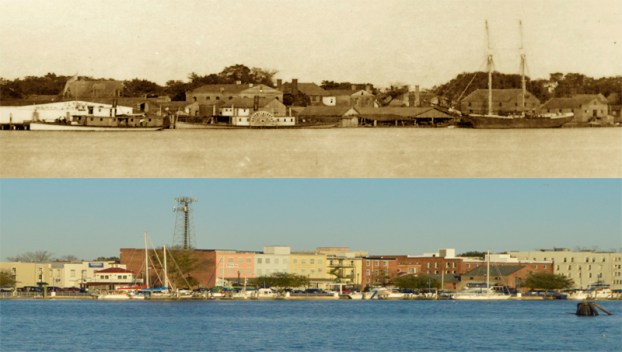 SAME PLACE, DIFFERENT TIME: One of the earliest known photographs of the Washington waterfront was taken in 1884 by a returning Union soldier who had been stationed in eastern North Carolina during the war. The second photo, taken in 2019, shows just how much the waterfront has changed in the past 130 years. (Historic Port of Washington and Matt Debnam/Washington Daily News)

In modern times, the Washington waterfront is often described as one of the city’s most valuable assets. Looking back across two centuries of Washington history, the importance of the waterfront to the town’s identity and development cannot be overstated. What has changed, however, is how its residents view and use Washington’s frontage on the Pamlico River, as well as the district’s physical appearance.

That change over time will be the topic of discussion during a special program at the North Carolina Estuarium on Thursday. Presented by the Historic Port of Washington, “The Changing Face of Washington” will show the evolution of the space from an industrial hub to a recreational public space.

“In the old part of town, what goes from Union Alley down to Bonner, we probably had several wharfs with warehouses attached to them out of the river, and perhaps a few shipyards during that period of time,” HPOW President Ray Midgett said. “From Festival Park to what is now Moss Landing, there have been shipyards and boatyards along that stretch probably from close to the beginning of Washington.”

Since the beginning, the waterfront was what built Washington. The location at the transition from the Pamlico to the Tar rivers made it the perfect location to transfer goods and crops produced upriver to larger sailing vessels bound for ports as far north as Boston and as far south as the Caribbean, and ample naval stores contributed to a burgeoning shipbuilding industry. With roads connecting cities either non-existent or in poor condition, the waterways served as the early veins of commerce in North America.

“I tell people all the time that geography is destiny,” Midgett said. “The confluence of the Tar River and Pamlico River, the location of the Outer Banks and Ocracoke Inlet all pointed to the development of Washington as a seaport.”

Throughout the early 20th century, that began to change. More and more goods were shipped by rail, and later by automobile, with less emphasis on shipping. Washington’s waterfront, as a result, began to slip into decline in the early to mid-20th century.

“Those businesses along the waterfront either closed, were not used or fell into disrepair, so you had quite a bit of decay as far as the buildings and infrastructure,” Midgett said.

In the late 1960s and early 1970s, an increased emphasis nationwide on urban renewal trickled down to Washington. With funds available to do so, the city purchased many of the derelict waterfront warehouses and tore them down. Establishing a bulkhead and filling in the area with earth, Stewart Parkway was created, albeit in a different form than it appears today.

From the earliest photo of the waterfront taken in 1884, to the present appearance of Washington’s crown jewel, those who attend the presentation will be treated to a pictorial history of the changes the waterfront has seen in the past 130 years, drawing on maps and a variety of sources. The talk begins at 6 p.m. Thursday at the N.C. Estuarium. Admission is free and donations are welcome.

The offer is for the veterans of eastern North Carolina: Stand Down on Feb. 15. On that day at First... read more