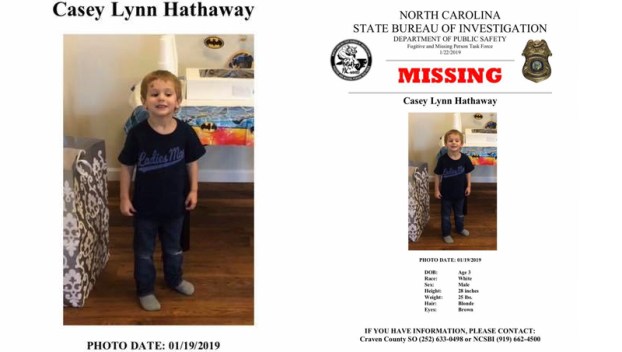 This story has been updated from a previous version to include information provided during a press conference Wednesday evening.

ERNUL — Local volunteers from fire departments and rescue squads throughout Beaufort County joined in the search for a missing toddler in Ernul on Wednesday.

Craven County Sheriff Chip Hughes told news outlets that 3-year-old Casey Lynn Hathaway was last seen playing with two other children at his grandmother’s house on Tuesday afternoon, but didn’t come inside with the others. Authorities were called around 1:45 p.m.

“Our number one priority is to find Casey,” Hughes said in a 5 p.m. news conference Wednesday. “We are treating this as a missing child investigation and search, and we are diligently utilizing every possible resource at our disposal.”

“It was a request to all local departments saying ‘If you have volunteers, have them meet at this location, at this time, and we’ll plug them in,’” Newkirk said.

In addition to volunteers from various county fire departments, civilian volunteers have come out by the hundreds to assist in the search and bring food to the rescue workers. Beaufort County Emergency Management Director Carnie Hedgepeth was on scene Wednesday helping coordinate local efforts at an operations command post on Toler Road in Ernul.

Aurora and Blounts Creek fire departments were on scene throughout the first leg of the search, late Tuesday night and into Wednesday morning,

As of press time, Emergency Services did not have a comprehensive list available of local departments aiding in the search.

“A number of our departments have members that are trained in land search,” Newkirk said Wednesday. “Chocowinity is one that jumps to mind. They actually have a state-recognized land search team, and it is my understanding they do have representatives there today (Wednesday).”

Beaufort County Sheriff’s Office Chief Deputy Charlie Rose said the BCSO stands ready to assist in the search, but their presence had not yet been requested as of Wednesday afternoon.

In addition to local resources from 10 to 12 other counties, including Beaufort, Hughes said the FBI, the Naval Criminal Investigation Service, North Carolina State Bureau of Investigation, the N.C. State Highway Patrol and the N.C. Division of Marine Fisheries have assisted in the search. The NCHSP and Marine Fisheries are both providing air support in addition to presence on the ground.

Speaking during the news conference, Craven County Emergency Services Director Stanley Kite said searchers are using a grid system that has grown from 30 meters near where Casey disappeared to 1 mile in the surrounding area.

“It’s been very difficult terrain, with very thick woods in some areas, logged over timberlands and rough ruts filled with water,” Kite said. “It’s been very tough terrain for both those individuals on the ground and the aircrafts having visuals.”

Drones and K-9 units have also been used in the search, and law enforcement went door-to-door Wednesday interviewing neighbors. On Wednesday night, Hughes said his office had no reason to believe that suspicious circumstances led to the boy’s disappearance. Hughes said the family has been cooperative throughout the search.

“We are getting quite a few leads, and we’re following up on them as they come in,” Hughes said. “As the evening goes on, we’re going to be concentrating our search efforts again, drilling down on some spots where we have certain interests.”

“Crews are preparing for night operations now,” Newkirk added from the scene Wednesday evening. “Plans are underway for operations to continue tomorrow with numerous trained search teams from across the state.”

Hughes previously said Casey wasn’t adequately dressed for the weather when he went missing. Temperatures hovered around freezing Tuesday evening and overnight, and were only slightly warmer Wednesday evening. Hughes also expressed concern about sinkholes and deep-water ditches in the area.

The Craven County Sheriff’s Office has asked residents in the Ernul area to check their properties, including storage sheds and vehicles. Casey is 28 inches tall, weighs 25 pounds and has blond hair and brown eyes. Anyone with information about Casey Hathaway’s whereabouts is asked to call 252-636-6703 or 252-636-6620.