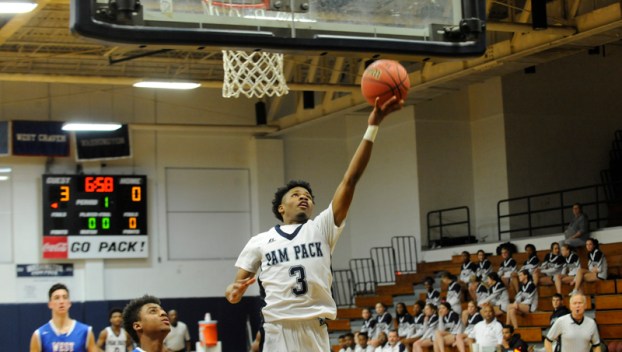 WASHINGTON — Holding a 15-point lead at the half, visiting West Craven eliminated Washington’s post and drive play, leaving the Pam Pack with no answers as it eventually sank to an 82-57 defeat Tuesday.

It looked to be a back-and-forth battle at the beginning, with Washington (5-9, 1-5 2A Eastern Carolina Conference) trailing West Craven (11-4, 5-2 2A ECC) by just four points at the end of a high-powered first quarter. But while the Pam Pack floundered offensively in the second and third quarters, scoring a combined 18 points, the Eagles displayed consistency, scoring 19 and 20 points in the second and third quarters, respectively. West Craven’s Sheldon Yates, who led all scorers with 26 points, teamed up with Caleb McKeel to take away any post drives Washington was focused on in the night, forcing the outside shot.

Although known to take many 3-point shots, the Pam Pack resorted to forcing looks from behind the arc out of desperation when it couldn’t work the ball inside. Washington made five 3-pointers in the contest, a hard adjustment for a team that has made that many in a single quarter during previous games.

“You know, that’s our game. We average eight or nine each game, and once we make them, that opens up our driving lanes,” Washington head coach Lane Raper said. “Unfortunately, we weren’t making them, so they didn’t have to guard them.”

Washington’s Omarion Blount saw one of his 3-pointers fall in the first quarter and led Washington with 21 points on the night. Jeremee Bryant, the only other Pam Pack player to score in double figures, finished with 10 points. Jordi Barnes chipped in with seven, Justin Powell contributed with six and the trio of Jamauri Bryant, Terry Moore and Jaden Hambric all had four points.

“He (Blount) kept us afloat,” Raper said. “Our effort was still there, but we are really proud of the way Omarion played, and (how) some other subs played (as well). Justin Powell had a good spurt there too, got in there, got a couple rebounds and got on the floor.”

Blount found success driving baseline and shooting a floater over the heads of Yates and McKeel. Blount had at least one floater in each quarter of the game from nearly identical spots on the floor. However, especially in the second half, West Craven adjusted its defense using a variation of pressing, 2-3, 3-2 and 1-2-2 zones, and really never seemed to allow Washington to get comfortable or find any sort of rhythm.

“We didn’t get hardly any loose balls and just came out flat. They run a lot of half-court trap and a lot of half-court defense and unfortunately right now, we can’t simulate that in practice, so it was hard for us. That’s something we have to work on,” Raper said. “We were a little off, not a whole lot of intensity at all.”

Many of West Craven’s points came from the Eagles’ ability to profit from second-chance opportunities. While both teams were somewhat successful in their offensive rebounding, the Eagles easily banked theirs off the backboard, while the Pam Pack found themselves stuck too far under the basket or were forced to kick it out wide. Additionally, Washington would go spurts of three, four or five chances at a look after an offensive rebound, but the shots just wouldn’t fall for the Pam Pack.

“We knew coming in what they were going to run, they did run a few other things just because of I believe their size, but once (West Craven head) coach (David Fernandez) saw us, he (knew) he had the size advantage,” Raper said. “We were boxing out, but I just think we got out-manned tonight.”

Washington will next travel to Snow Hill Friday to take on the Greene Central Rams, who stand atop the conference standings with a perfect record in league play.

WASHINGTON — Fresh off of a 26-point loss to conference leader Kinston on Friday that snapped the Lady Pam Pack’s... read more