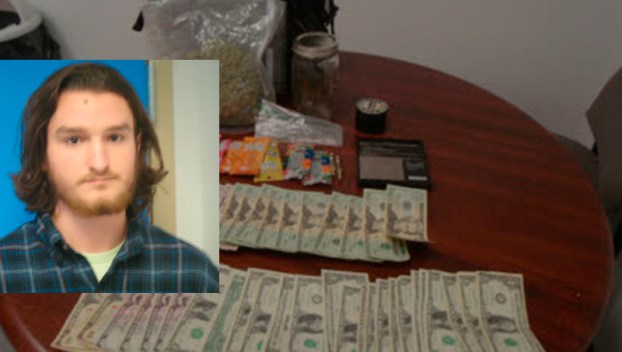 Officers seized 12 ounces of marijuana, paraphernalia, and $1,034 in cash from Josiah Creef of Manteo in a drug arrest in Columbia on Dec. 26. (TCSO photo)

Josiah Creef, age 20, of Manteo was arrested in Columbia on Dec. 26 and charged as a drug dealer, Sheriff Kevin Sawyer reported.

Deputies with the Tyrrell County Sheriff’s Office  assisted the State Highway Patrol with a vehicle stop on US 64 east of Columbia.

Trooper Christopher Hassell observed the odor of marijuana emanating from the vehicle after he stopped it.  The Trooper asked for the marijuana in the vehicle, and the driver, Creef, produced a large bag of marijuana. A probable cause search of the vehicle also yielded cash, scales and THC oil.

Creef was charged with felony possession with intent to sell or deliver marijuana and with possession of marijuana drug paraphernalia.

Officers seized 12 ounces of marijuana, 9 grams of THC oil, scales and containers, and $1,034 in US currency.

“Hash oil or cannabis oil is an oleoresin obtained by the extraction of cannabis or hashish,” according to Wikipedia. “It is a concentrated form of the plant containing many of its resins and terpenes – in particular, tetrahydrocannabinol (THC), cannabidiol (CBD), and other cannabinoids.”