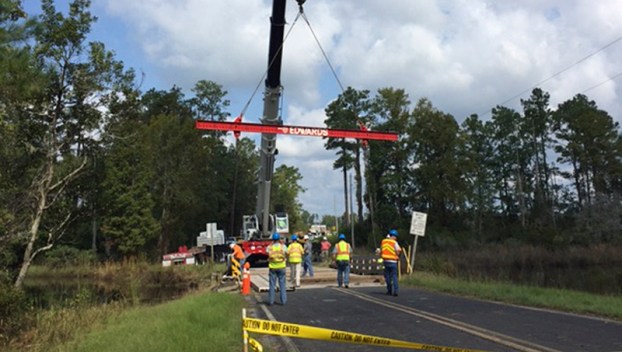 ON THE MEND: A North Carolina Department of Transportation crew made temporary repairs to the Duck Creek bridge on Hawkins Beach Road after Hurricane Florence. The bridge is currently being replaced. (Stewart Rumley)

BATH — The North Carolina Department of Transportation has closed a lane of a Beaufort County road to rebuild a bridge that was heavily damaged during Hurricane Florence.
A lane of Hawkins Beach Road, which is near Camp Leach Road, is now closed through the beginning of September.

“This lane closure will allow crews to safely remove the existing bridge over Duck Creek and build a new one,” a press release from NCDOT stated.

The Duck Creek bridge was undriveable after the September hurricane, cutting off access to Hawkins Beach for more than a week, as Hawkins Beach Road is the only road into the waterfront neighborhood on the Pamlico River near Bath. Hawkins Beach residents had to rely on rides from neighbors to cars residents had parked on higher ground on the other side of the bridge in advance of the hurricane in order to get around.
As work on the bridge continues, one lane will always be open for traffic to eliminate the need for a detour. NCDOT has set up an automated light signal to help drivers safely share that open lane during the project, according to the press release.
NCDOT warned that drivers should anticipate needing extra time and use extreme caution while crews are working on the bridge.
More real-time travel information, can be found at DriveNC.gov or follow NCDOT on social media.

In modern times, the Washington waterfront is often described as one of the city’s most valuable assets. Looking back across... read more