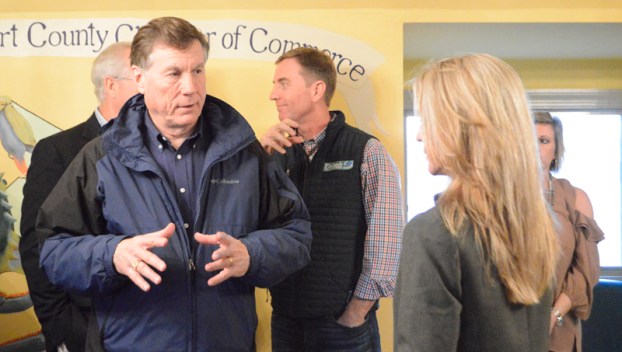 In the wake of Hurricane Florence, more than 380,000 insurance claims were filed in North Carolina. According to Causey, most of these claims have already been paid.

“We were much better prepared than in Matthew and some of these other storms,” Causey said. “We have people on the phones every day from 8 to 5 p.m., so anyone can call about any subject, and they get help pretty quick.”

Of those impacted by the hurricane, those without flood insurance were hit hardest.

After the hurricane, Causey said that very few state-owned buildings actually carry flood insurance — 77 of 12,700. That same trend applies to many homeowners in the state.

“Less than 3 percent of the total homeowners in this state have any kind of flood insurance coverage,” Causey said. “Wherever you live in North Carolina, if it rains where you live, you need flood insurance.”

Causey encouraged every homeowner to consider flood, hail and wind insurance, and encouraged the insurance agents gathered at the Chamber to pass that along to their clients.

At fire stations throughout the country, volunteerism is down. Attracting the next generation of volunteer firefighters is proving a challenge, and Beaufort County departments are no exception.

As far as potential solutions, Causey said junior firefighter programs at high schools throughout the state have seen some success in incentivizing young people to become certified firefighters. In Beaufort County, each fire department has its own requirements for enrollment, with opportunities for youth generally beginning from ages 16 to 18.

At Pantego Volunteer Fire Department, their program trains teens as young as 14 through the National Junior Volunteer Firefighter Program and extends that opportunity to youth throughout the county.

“We have got a couple in through that program, but nothing like we used to,” Pantego VFD Chief Derrick Meyers said. “It does help, but not too the point of what we need. I feel like if we don’t get them at the young age, they won’t have the interest.”

On Jan. 31, Beaufort County Community College will host an Exploring program for youth and young adults ages 14-20 that are interested in future careers in firefighting, emergency medicine or law enforcement.

“The fire career, just like law enforcement and EMS, is not for everybody,” said BCCC Director of Fire and Emergency Management Training Johnny Williams. “The hope is that if you expose them at an early age, they’ll get bit by the bug and want to pursue that career or as a volunteer. It is a building block.”

ARE YOU SELLING INSURANCE?

Causey said this question comes up frequently with regard to the DOI’s purpose. The short answer is no.

The NCDOI is tasked with a variety of responsibilities, including regulating the insurance industry, enforcing state building codes and investigating insurance fraud. The commissioner also serves as the chief fire marshal for the state.

Overall, Causey’s message was simple — the NCDOI is there to help. For more information on the department, visit www.ncdoi.com. Consumer helplines are available to answer insurance questions at 855-408-1212.

The Beaufort County Sheriff’s Office deputy involved in the Oct. 20, 2018, shooting of a Simpson man wanted for murder... read more