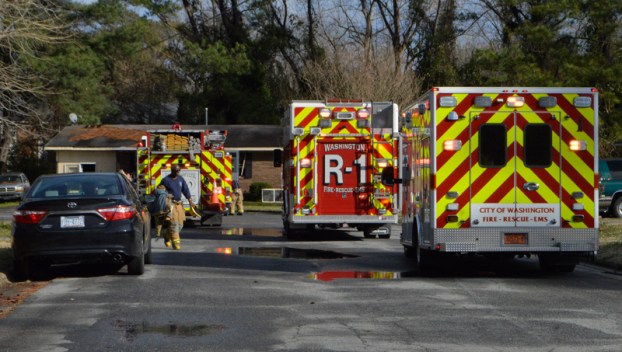 SAFE: A family in a home on James Drive in Washington escaped without injury when a fire broke out in the kitchen and spread through the house. (Matt Debnam/Daily News)

Quick response by Washington Fire-Rescue-EMS prevented what might have become a fully involved structure fire on Thursday afternoon. Multiple fire trucks, including support from Bunyan Volunteer Fire Department, responded to a residence on James Drive in Washington to find heavy smoke coming from the home.

According to Washington Fire & EMS Battalion Chief Doug Bissette, a family inside when the fire ignited was able to escape with no injuries, although parts of the house suffered significant damage. Bissette said that the fire began in the kitchen and extended to the living room and down the hallway of the home. The exact cause of the fire had yet to be determined. The American Red Cross was on hand to assist the family.

“They got in and were able to put water on the seat of the fire really fast, and that prevented it from spreading further in the house,” Bissette said. “We always harp on training and that training showed today. We were able to arrive on scene and put the fire out quickly.”