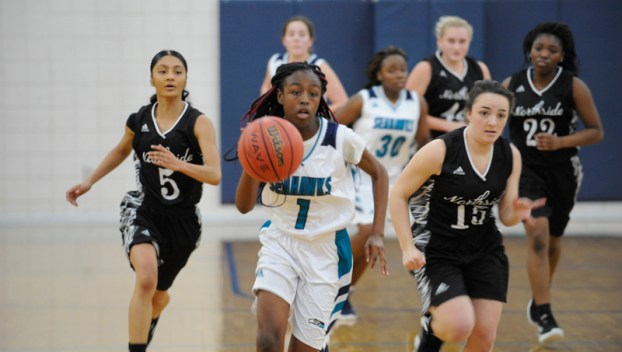 WILLIAMSTON — The Southside girls basketball team got back to .500 on the season with a 57-25 win against Bear Grass Charter Wednesday night, completing the season sweep over the Bears after defeating them at home in December.

While a positive result for Southside (6-6, 2-4 1A Coastal Plains Conference) with a final score indicating a blowout, it wasn’t the complete performance Seahawks head coach Milton Ruffin was hoping to see from his players.

“We have to be ready,” Ruffin said. “We weren’t mentally prepared for the ball game. In the end, we wanted to take care of business tonight. Playing down to our competition isn’t good and we were sluggish in the first half. We adjusted to a zone to get something going for us, and it worked well. They played well despite what the score says.”

It was a sloppy first quarter between the Seahawks and the Bears (1-11, 1-3 1A Atlantic 5 Conference). Southside maintained an early lead, but couldn’t capitalize on its chances to extend it. The Bears frustrated the Seahawks early with their press, but the Seahawks still took an 11-7 lead into the second quarter.

The Seahawks began to build on their lead in the second. Despite being in the double bonus early in the second, the Bears were unable to keep the scoreline close. This came after a strong first quarter from a Bear Grass team that has struggled to score for most of the season. Southside outscored the Bears 13-4 in the second period to take a 24-11 lead into the halftime break.

Southside built its lead all the way up to 24 in the third quarter. The Seahawks attacked the glass on both ends and generated a lot of extra possessions. In addition, the Seahawks scored some easy baskets at a quick pace. The Bears couldn’t answer a 10-0 run from Southside midway through the period, and Southside led 39-19 at the end of third period.

The fourth quarter was basically a formality, as Southside continued to add to its already big advantage. An adjustment to a 3-2 zone also set the tone for the Seahawks’ second-half dominance. Shantel Cannon led the Seahawks with 18 points, while Jasmine Blango added 15 and Laquisha Woolard chipped in with 12.

Despite the blowout victory, Ruffin and his players won’t rest on their laurels, as they know more wins will be needed to qualify for the postseason.

“We’ll enjoy this win, but we have to continue to improve,” Ruffin said. “In the end, it’s about stringing together wins so we can have a chance to make the playoffs.”