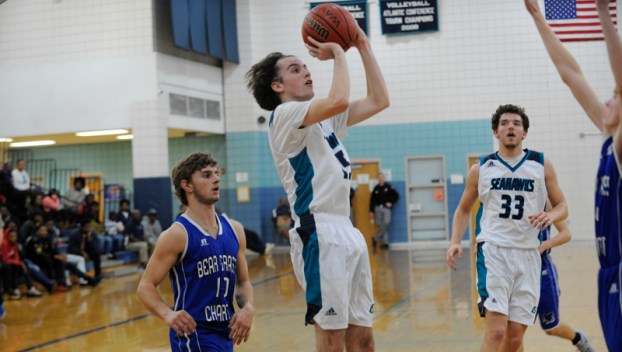 WILLIAMSTON — Succumbing to Bear Grass Charter’s 3-point barrage, the Southside boys basketball team fell on the road to the Bears Wednesday night, 68-41, to remain winless in away games this season.

Bear Grass (8-6, 5-1 1A Atlantic 5 Conference) set the tone early from beyond the arc and on the defensive end of the floor. In the end, it wasn’t the performance Southside head coach Sean White was looking for from his Seahawks (3-11, 0-6 1A CPC) against a team they defeated, 70-62, at Southside on Dec. 14.

“Their (the Bears’) outside shooting set the tone for the game and it felt like they couldn’t miss early,” White said. “We didn’t match their energy in the first half, which allowed them to get a big lead in the first half.”

It was a slow start for both teams as the Seahawks and Bears looked to grow into the game. However, the effort and intensity picked up as the first quarter went on. Bear Grass used the 3-ball to its advantage, as it knocked down a few of them early. By the end of the opening quarter, Southside trailed 17-13.

Continuing to nail their shots from beyond the arc, the Bears extended their lead to 11 late in the second quarter. Southside did stay within striking distance, but the Bears traded baskets with the Seahawks in the last minute of the first half to keep their advantage. Bear Grass held a 38-25 lead at halftime.

The Bears continued to impose their will in the second half. They built their lead to 26 late in the third quarter and never looked back. Southside went cold from the field en route to scoring only four points in the period. The Seahawks were so snake bitten it felt like there was a lid on the basket to start the second half. Bear Grass nearly doubled its halftime lead and held a 54-29 advantage heading into the fourth.

The fourth quarter saw some chippy play as both teams continued to play hard. White received a technical foul late in the game that fired the team up. However, the margin was too much to overcome for the Seahawks. Jalen Kirkman scored 12 points to lead the way for the Seahawks and Ty Smith added seven.

Looking to get back in the win column, Southside didn’t have to wait long for the opportunity, as they traveled to take on Columbia last night. The Seahawks defeated them at home, 62-26, on Dec. 12, but were short-handed last night, as Jamari Nelson left Wednesday’s loss to Bear Grass with an injury after being elbowed in the back of the head.

White said he already told his players they needed to move on from the loss to the Bears and focus on the matchup with Columbia. It’s not ideal for Nelson, who White described as one of his best players, to be out injured, but White said “we’ll try to manage.”

“In the end, we want to put ourselves in a good position to win even on a quick turnaround,” White said.

Full coverage of Southside’s game against Columbia can be found in Friday’s edition of the Washington Daily News.

By LAIEKE ABEBE For the Daily News WILLIAMSTON — The Southside girls basketball team got back to .500 on the... read more