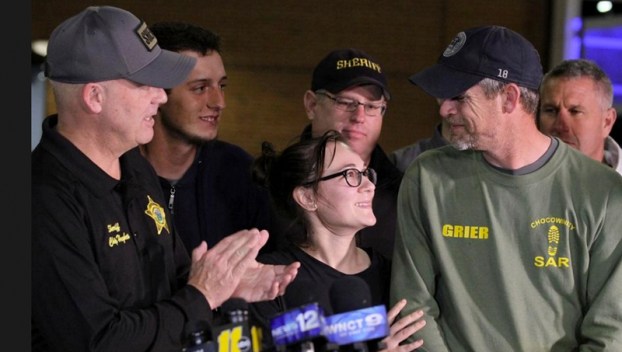 GRATEFUL PARENTS: Britney and Chris Hathaway, parents of 3-year-old Casey Lynn Hathaway, thank Shane Grier, at right, captain of Chocowinity EMS, and everyone involved in helping to find their missing son during a press conference at CarolinaEast Medical Center in New Bern. Casey is recovering after being found by Grier and search teams off of Aurora Road near Cayton on Thursday evening. Hathaway was reported missing from 200 Toler Road in Craven County on Tuesday. (Gray Whitley/New Bern Sun Journal)

After 56 hours missing in the woods near his grandmother’s Craven County home, the first face 3-year-old Casey Lynn Hathaway saw was that of Chocowinity EMS Capt. Shane Grier.

While Grier was celebrated as a hero on Thursday evening, as Casey was reunited with his family at Carolina East Medical Center in New Bern, he made one thing clear in an interview Friday: without the efforts of many people, the search would not have been successful.

From trekking through the woods in search parties, to preparing meals for searchers, to praying for the boy and his family, Beaufort County people helped make the search a success.

It was about 9:50 p.m. Thursday when Grier and Hendrix Valenzuela, with N.C. Emergency Management, responded to a tip from a woman walking her dog on Aurora Road who said she heard what sounded like a child crying.

“We heard the boy say ‘Mama,’” Grier said. “We made entry in, and we found him probably 60-65 meters inside the woods, entangled in heavy briars. We immediately picked him up, I ran to the police vehicle, we put him in the police vehicle and transported him to the hospital.”

Grier said the boy was alert and responsive, but very cold when he was found. As of Friday afternoon, Casey was in good condition and scheduled for release Saturday.

“It’s amazing to me how he survived,” Grier said Friday. “I don’t think there was anybody in the ER last night not crying.”

Throughout the search process, volunteers from across Beaufort County were on hand to help. On Tuesday afternoon, when the news first broke about the boy being missing, Beaufort County Emergency Services Director Carnie Hedgepeth says his office reached out to Craven County’s Emergency Management department and indicated Beaufort County resources were available.

Members of the Blounts Creek and Aurora volunteer fire departments helped with the initial search on Tuesday night, and were joined Wednesday morning by volunteers from Belhaven, Bath, Old Ford, Blounts Creek, Aurora and Chocowinity fire departments, along with the Chocowinity Search and Rescue Team. When the search was narrowed to include only professional search and rescue personnel on Thursday, members of the Chocowinity SAR Team remained on scene until Casey was found.

“It was very humbling to see each individual, both volunteers from departments and the general public, go together in such a unified manner and help however they could,” Hedgepeth said.

Grier added that his department constantly offers trainings for the community and all over the state. From basic first aid to wilderness search and rescue, the trainings offered at Chocowinity Fire and EMS come at a low cost and are sometimes free to the public.

“Anybody that wants to get involved in it, I encourage them,” Grier said. “Get some training, because trained people is what we need. This could have happened in Beaufort County as easily as it did down there.”

When more than 600 people, both trained rescue personnel and community volunteers, showed up to aid in the search Wednesday morning, the operation faced a new challenge. Having only expected 200 people on scene that day, the prospect of feeding more than 400 extra people became a logistical issue.

The community, however, rose to the occasion.

One such community member was Chocowinity resident Beverly Janes. Having worked with a Search and Rescue group in Florida, Janes helped with that group’s logistics when they came to North Carolina after Hurricane Florence. When she heard the volunteer turnout had been far more than expected on Wednesday, Janes called on someone she had worked with to secure meals during Florence — Chrislyn Wedderien.

“Chrislyn really pulled through for Hurricane Florence, big time, and I started working with her through that,” Jaynes said. “My timing is always perfect with Chrislyn. ‘I know you’re feeding the Small Business Revolution people, but would you happen to like to feed 200 search and rescue volunteers?’ I fully expected her to say ‘No, I’m not going to do that, I don’t have time today, I’d love to’ and instead the response was, ‘Can you be here by 2?’”

Jayne’s call came in at 10 a.m. and by 2 p.m., the staff of Carryout by Chrislyn had prepared enough sliders and chili to provide for 200 people, all while preparing to cater a major reception at the Turnage Theatre that night.

With Chrislyn’s food, and donations from other businesses and individuals, there was plenty to go around.

“God definitely speaks to you and says ‘This is your primary purpose,’” Wedderien said. “We really enjoy doing it. It’s definitely a ministry or service. It just feels so good. Everyone keeps saying ‘Thank you’ and I’m like, ‘Why are you thanking me?’ This is just something that we naturally do, and we get so much pleasure out of it, both myself and my staff. My staff is ready to just kind of jump on the task and make people’s lives a little happier in the midst of the turmoil.”

From the kitchen of that restaurant, to the woods of Craven County, the same sense of naturally wanting to help carried strong this week, with regular people doing anything in their power to bring Casey Hathaway home.

“It just goes to show you the depth of community support we have in eastern North Carolina,” Emergency Services Fire/Emergency Management Chief Chris Newkirk said. “It’s so easy to get caught up in all the divisiveness. … But in a case like this, it’s almost a natural instinct to go out and help, and there was no thought beyond that.”

A new discount grocery store on West 15th Street in Washington might not exist if not for Hurricane Florence, and... read more