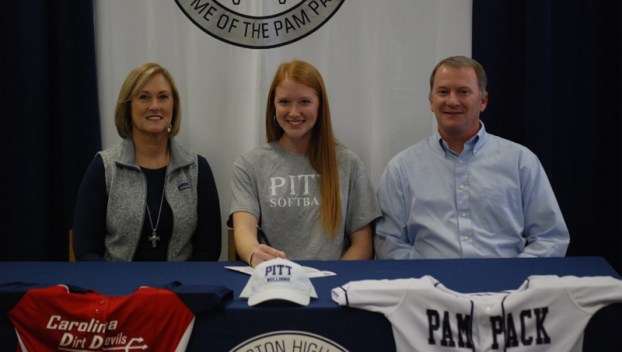 WASHINGTON — Coming off a stellar junior season last year that saw her ranked among the top five in the conference in batting average, hits, runs, doubles, triples and home runs, Pam Pack softball player Summer Campbell confirmed she won’t be putting down her bat and glove after graduation by signing to play for Pitt Community College this afternoon.

Campbell, a shortstop for Washington, faced a tough decision with where she wanted to go, but is ecstatic knowing she’ll be playing softball at the next level.

“It feels amazing,” Campbell said. “It was a long decision between Barton College and Pitt. But I finally decided Pitt and I’m super excited.”

With how important family is to her, Campbell knew she wanted to go somewhere that wasn’t too far from home and wouldn’t prevent her from coming back on the weekends. She said she finally went with Pitt because it felt “more homey.”

Last year as a junior, Campbell said she didn’t actually want to play college ball. But she changed her mind, thinking “if I have the ability to play, why not play?” At that point, Campbell started putting extra work in to raise her game even more.

“I started going to the gym every night lifting weights and hitting in the cage every single night. And just mentally prepared myself,” she said.

Doug Whitehead, Washington’s softball coach, has seen the work Campbell puts in up close and said her willingness to improve, along with her versatility, are what helped her get this opportunity to keep playing softball.

“She is just one of those kids that always wants to be there. She works and hustles from the start of practice to the end of practice,” Whitehead said. “She’s always up for asking for advice if she goes through some slumps — which thank goodness she hasn’t had many. But she’s always asking for help, asking for more practice of any kind, whenever she feels like she needs it. And she’s just so versatile; that’s the biggest thing with her. I mean, we’ve got her at shortstop, she can pitch, she can play any position I ask her.”

Campbell said after taking her prerequisites at Pitt, she plans to transfer to East Carolina University to follow her goal of becoming a speech therapist. She is focused on closing out her high school career with the best senior season possible with her teammates, many of whom she’s known since she was 8 years old through travel ball. But at the same time, Campbell is eager to start a new chapter in her life as well.

“I’m super excited to be on my own in my own apartment, but I’m also excited to play on the college level.”