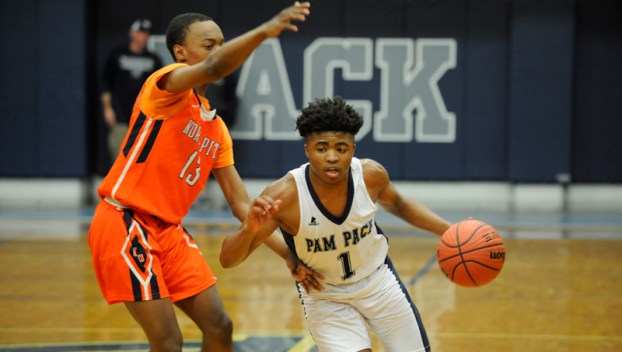 LEADING SCORER: Omarion Blount blows by a North Pitt defender during a game earlier this season. Blount dropped 25 points on Greene Central Friday night but it wasn't enough to overcome the Rams in a 91-55 loss. (Sean Finnerty | Daily News)

SNOW HILL — Thanks to a balanced offensive effort that saw nine different Pam Pack members get on the scoreboard, as well an opportunistic defense that forced plenty of turnovers, Washington came away with a 59-27 victory on the road Friday night over Greene Central.

Washington (8-7, 4-3 2A Eastern Carolina Conference), as is often the case, was led by the play of Daria Jones. The senior scored five of her team-high 10 points in the first quarter, as Washington built a 17-8 lead over Greene Central (0-18, 0-8 2A ECC) through a quarter of play.

The Pam Pack blew the game wide open in the second quarter, holding the Rams to three points while scoring 22 to take a 39-11 lead into halftime. Washington continued the onslaught in the third and went up 57-16 with 2:14 left in the period, triggering a running clock.

Washington returns to the court tomorrow when it North Lenoir at 6 p.m.

SNOW HILL — Washington fell on the road to Greene Central, 91-55, Friday night, as the Rams’ domination of the paint proved too much for the Pam pack to overcome.

Having already lost to the Rams at home by 26 points earlier this season, Washington (5-10, 1-6 2A Eastern Carolina Conference) knew it would be outsized and outmatched by Greene Central (16-5, 9-0 2A ECC) inside. The Pam Pack hoped to overcome that by taking as many quality 3-pointers as possible, but the play of Ram Imajae Dodd was too much to overcome.

The senior big man scored 21 points, many coming off of dunks, while grabbing 14 rebounds and recording 10 blocks to thoroughly dominate the game. Washington made 10 3-pointers, but only nine field goals from inside the arc, partially due to Dodd’s presence in the paint.

Washington’s Omarion Blount led all scorers with 25 points, but he didn’t receive much help on the offensive end. Jeremee Bryant chipped with 12 points Terry Moore scored nine and Jamauri Bryant had six points.

The Pam Pack will try to bounce back tomorrow when it welcomes North Lenoir to Washington.

Lady Panthers blown away by Hurricanes

BAYBORO — The Northside girls basketball team found itself running into the buzz saw that is Pamlico County Friday night, as the conference-leading Hurricanes made quick work of the Panthers, 66-10.

Northside (5-5, 3-3 1A Coastal Plains Conference) found out firsthand just how good Pamlico County (13-2, 6-0 1A CPC) is this year. The Hurricanes quickly asserted their dominance, as they held a 24-4 point lead by the end of the first quarter. Pamlico County continued to pour in the points, scoring 17 in the second and 20 in the third, while holding Northside to a combined six points in those quarters. The Hurricanes went up by 40 in the third, triggering a running clock.

Alexia Somers, the only Panther with multiple field goals, scored six points on the night, while Jessica Foster finished with two points and Katie Godley and Prentiss Thomas each scored a point at the line.

It doesn’t get easier for Northside, as it travels to Northside today to take on the Knights, who sit at second place in the conference standings.

SNOW HILL — Washington’s Omarion Blount lead all scorers with 25 points, but the Pam Pack came up short away... read more