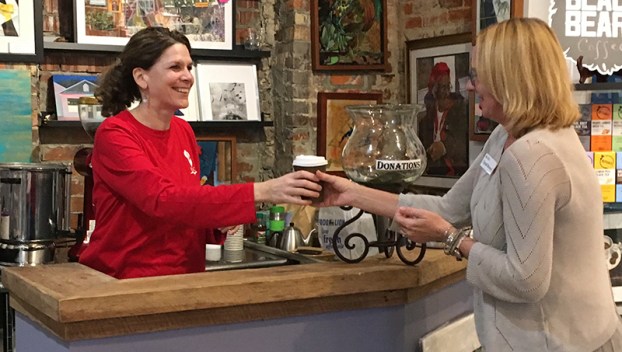 COFFEE AND CONVERSATION: Pamlico Rose Institute for Sustainable Communities board member Allison Greene-Sands serves up a hot cup of coffee for Red Cross representative Cynthia Brown during one of the On Common Grounds pop-up coffee shops at The Contemporary Art Exchange. (PRISC)

A two-month-long experiment in doing good came to a close this past weekend, as Contemporary Art Exchange hosted its final pop-up coffee shop of six held at the space in December and January.

At the heart of On Common Grounds, organizers Robert Greene Sands and Tina Jandrow wanted to create a space for conversations and promoting awareness of the local nonprofits serving Beaufort County.

With that idea in mind, the two decided to host a pop-up coffee shop series at the art gallery on Sunday mornings. Each event would feature a local nonprofit, with all donations benefitting that group. That model proved to be a hit, and momentum grew for the event, eventually attracting regulars.

“The nonprofits who participated were able to raise some funds, which is always a good thing,” said Sands, CEO of Pamlico Rose Institute for Sustainable Communities. “They were able to communicate their mission in an informal setting to people who were interested.”

The first event, mired by a fozen mix of weather, brought in $90 for the American Red Cross. In addition to blood drives, the Red Cross provides disaster relief and assists families whose homes have been impacted by fires.

The next weekend, just in time for Christmas, the event raised $150 for Zion Shelter and Kitchen, a men’s shelter located on Martin Luther King Jr. Drive that provides meals for anyone who’s hungry and emergency shelter for homeless men in Washington.

On Jan. 11, the group raised $110 for Pamlico Rose Institute for Sustainable Communities, the host organization of On Common Grounds. PRISC supports programs to assist veterans in reintegration into society, as well as the rehabilitation of historic structures.

The coffee shop had its largest donation pool on Jan. 18, raising $365 for Open Door Community Center, a soon-to-be-open shelter dedicated to helping homeless women and their children get back on their feet.

On its final weekend, On Common Grounds raised $161 for the Beaufort County Veterans Stand Down, an event that will offer veterans access to counseling, employment opportunities, healthcare services, housing and legal services, haircuts, personal hygiene products and a free lunch. The Stand Down will be held at First Christian Church, Disciples of Christ, from 9 a.m. to 2 p.m. on Feb. 15.

“The more people are educated and more aware of these organizations’ missions to a greater detail, the more they can talk to other people and be able to communicate the kind of things people want to know,” Sands said.

While On Common Grounds is done for now, Jandrow said there is a possibility something similar might come to the gallery in the future, perhaps on a monthly basis.

“I offer the gallery up to nonprofits on a regular basis,” Jandrow said. “If Robert wants to use it on Sundays or another nonprofit wanted to use it during times when it’s available, I would support that because it’s a nice space to come together.”