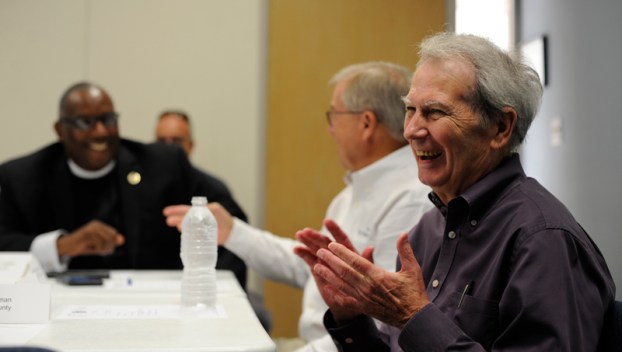 A RECENT VISIT: U.S. Representative Walter B. Jones is pictured here during a visit to Washington in the aftermath of Hurricane Florence. During the visit, he spoke with local officials, including Beaufort County Commissioners Jerry Langley, left, and Frankie Waters, center, about the damage done and the federal response to the storm. (Vail Stewart Rumley/Daily News)

Beaufort County’s representative in the U.S. House of Representatives is in hospice care this week. A news release from the office of Congressman Walter B. Jones (R-Farmville) says that the congressman was suffering from declining health over the weekend after sustaining a broken hip last Monday.

Jones, 76, had been battling ailments in recent months, and was excused from Congress in late 2018 after missing a number of votes. He was reelected to his 13th term in Congress in November, facing no opposition after defeating two Republican challengers in the primaries. Jones represents North Carolina’s 3rd Congressional District, which includes Beaufort County, the Outer Banks, the Crystal Coast, Jacksonville, New Bern, Greenville and Elizabeth City.

According to North Carolina state law, and the U.S. Constitution, any time there is a vacancy in the U.S. House of Representatives, a state’s governor is obligated to call for a special election to fill the vacant seat. Since Jones would not be up for re-election until 2020, this would also include a special primary election.

Jones has represented North Carolina in the House since 1995. In his absence, the 3rd Congressional District does not have representation in the House of Representatives.

A missing Washington man who was listed as the subject of a Silver Alert, was found dead in Hyde County... read more