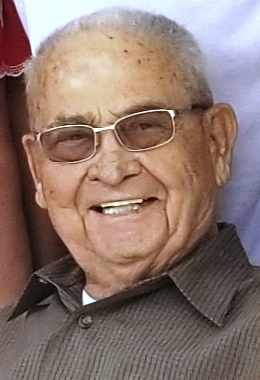 Funeral services will be held at 11 a.m. Thursday, Jan. 31, 2019, at Five Points Free Will Baptist Church, officiated by Pastor David Young. The family will receive friends prior to the service from 10 a.m. until the service hour at the church. Burial will follow in Pamlico Memorial Gardens.
Marvin was born in Jones County on Aug. 20, 1926, the son of the late Leonard Eubanks and Annie Daugherty Eubanks. He was a member of Five Points Free Will Baptist Church and had a great love for his church family.

Marvin served his country in the United States Army in Germany, where he met his wife, Gisela. They returned to the states and settled in New Bern, where he joined the North Carolina National Guard. After a brief stay in New Bern, Marvin and Gisela moved to Washington, where he served as Shop Chief and Mess Sergeant. Marvin retired in 1986, using his mechanical skills to aid him in his lifetime hobby of repairing boat motors. When he had spare time, he enjoyed fishing, and if you were lucky, you had a chance to enjoy what many called one of the best meals they ever ate as he loved cooking and was known for being one of the best cooks around.
Mr. Marvin is survived by a daughter, Rosie E. Douglas and husband Keith, of Washington; two sons, Marvin L. Eubanks and wife Denise, of Washington, and Ted Eubanks and wife Roberta; six grandchildren, Jonathan Eubanks, Stuart Eubanks, Megan Douglas, Tyler Douglas, Alexandra Eubanks, Sophie Eubanks; and eight great-grandchildren, Levi Eubanks, Luke Eubanks, Morgan Eubanks, MacKenzie Douglas, SaraBeth Woolard, Kyra Toppin, Koen Toppin and Eli Douglas. He was preceded in death by his wife of 60 years, Gisela Villwock Eubanks; four sisters; a brother; and great-granddaughter: Rylen Eubanks.
In lieu of flowers, please contribute to a charity of one’s choice or the Pamlico Dialysis Unit c/o 1983 W. Fifth St., Washington, NC 27889.
You may share a memory with the family by visiting www.josephpaulfdl.com.
Joseph B. Paul, Jr. Funeral Director Licensee of Washington is serving the Eubanks family.