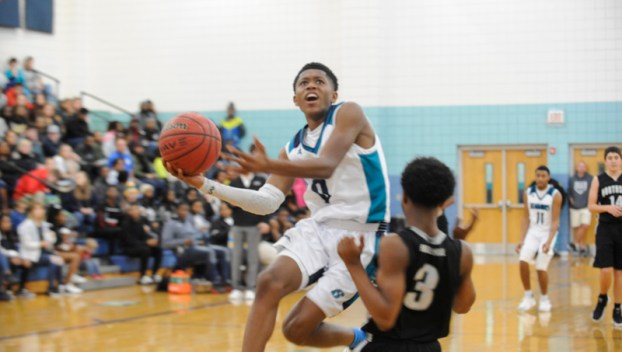 TAKING OFF: Southside’s Ty Smith goes up for a layup during a game against Northside earlier this season. Smith scored eight points Tuesday, as the Seahawks fell at home to Tarboro. (Sean Finnerty | Daily News)

WILLIAMSTON — The Panthers found themselves trailing by 15 at the half Tuesday night, but looked to be on pace to play better this time around against Riverside, compared to the last matchup in mid-December. However, Northside scored just two points in the second half, an early third quarter lay-up by Jessica Foster, before being blanked for the final 14 minutes of the game. Northside dropped its second meeting with Riverside this season, 63-22.

Foster, along with Alexia Somers, led Northside (5-6, 3-4 1A Coastal Plains Conference) with six points. Prentiss Thomas added three points, Gabby Slade, Ke’Nysha Satchel and Deidre Spencer each had two points, and Amelia Woolard finished with one point for the Panthers. Northside didn’t get many looks in the second half as Riverside (13-4, 7-1 1A CPC) dominated the passing lanes and cut off the forward play that Northside was attempting to run.

In the first half, Northside was able to pass the ball inside to the block, turn for a shot or pass back out, helping them rack up points. But once the post-play was completely taken away in the second half, Northside passing excessively, resulting in many turnovers.

WILLIAMSTON — After falling behind 11-2 early in the first half of the first quarter, Northside looked to find its rhythm after going on a 10-1 run to end the frame and trailed by just two heading to the second. However, its failure to break into Riverside’s defensive scheme and failure to get back on defense in transition left the Panthers on the losing side in a 75-52 contest Tuesday.

Northside (9-6, 4-3 1A CPC) leading scorer Rashod Smith was held to just four points in the first half, but scored 12 second-half points to lead the Panthers with 14. Tyler Turner chipped in with 13 points, Zach Green added 12 and Kenneth Winfield tallied 11 points. The Panthers’ lone other basket came from Clark O’Neal.

Riverside (11-6, 7-1 1A CPC) slowly tired as the game went along, allowing open passing lanes, but held the Panthers to just 22 points in the first half. The game was a completely different look than the back-and-forth, high-scoring affair from mid-December when Northside came out with the victory.

CHOCOWINITY — Jalen Kirkman led a balanced Southside effort Tuesday night in its eight-point loss to Tarboro Tuesday, 61-53. The Seahawks saw eight of its players put points on the board, thanks to a great effort in breaking the Vikings’ full court press.

Although playing from behind most of the game, Southside (3-13, 0-7 1A CPC) figured out how to get through the Tarboro (11-5, 6-2 1A CPC) press and made the game close, despite scoring just 10 points in the first quarter. Southside held the Vikings to seven fourth-quarter points, but its 14 points in the final period weren’t enough to complete the rally.

CHOCOWINITY — Despite carrying a 7-6 lead into the second quarter, and a 23-22 lead entering the fourth, Southside faltered late in a 38-25 loss to Tarboro on Tuesday.

The Seahawks’ Shantel Cannon led all scorers with 17, but Southside (7-7, 2-5 1A CPC) didn’t generate much more offense. Jasmine Blango added five points, Kejasia Midgette had an early basket in the first for two points and Delaney Ayers went 1 for 2 from the foul line in a frustrating night for the Lady Seahawks.

Tarboro (11-7, 6-2 1A CPC) saw just one of its players reach double-figures as Miracle Roundtree finished with 11 for the night, but eight of its eleven players put points on the board.

After scoring 11 points in the third, Southside was in the game after reclaiming the lead after its halftime deficit. However, any steam it carried didn’t roll over to the final frame. The Seahawks scored just two points and allowed Tarboro to score 16, its highest of any quarter, allowing the game to be broken wide open.