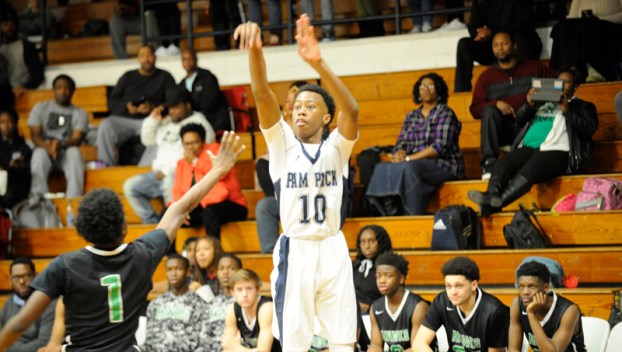 FROM DOWNTOWN: Jeremee Bryant follows through on a 3-point shot last night against North Lenoir. Bryant sank four 3-pointers in the game, as the Pam Pack made 14 as a team, but it wasn’t enough to take down the Hawks. (Sean Finnerty | Daily News)

WASHINGTON — After a 26-point third quarter last night gave the Washington boys basketball team a small lead heading into the fourth, the Pam Pack looked on track to pick up its second conference-win of the season. But Washington couldn’t make the necessary plays late to come away with the victory, allowing North Lenoir to pull away in a 74-68 loss at home.

The fourth quarter, which opened with Washington (5-11, 1-7 2A Eastern Carolina Conference) holding a 56-52 lead, was a tense affair with several lead changes. North Lenoir (10-10, 3-5 2A ECC) stole the lead two minutes in, only for Jordi Barnes to take it right back for the Pam Pack on the following possession with a 3-pointer, one of four he made in the game. Hawks responded immediately to retake the lead, 62-61, making it three lead changes in less than a minute.

North Lenoir held the lead for almost three minutes of play, before Barnes, who finished with 16 points, found himself wide open in the corner and drilled another 3-point shot to tie the game at 66 with 1:58 left. But it was in the final moments when Washington let the game slip away.

North Lenoir’s Tyrek Artis made a layup while getting fouled to put the Hawks up, 68-66, with 1:21 left. The senior missed the free throw but the Hawks grabbed the rebound and burned 21 seconds off the clock, before drawing a foul and hitting the two free throws to take a four-point lead with a minute remaining.

In a last-gasp effort Jamauri Bryant hit a baseline floater for two of his 16 points to bring the Pam Pack within two with 0:38 on the clock. But North Lenoir hit its free throws late and Washington missed a 3-point shot at the 0:18 mark and couldn’t track down the rebound to seal its fate.

With a team that contains just one senior and relies on several sophomores to help lead the way, Raper said knowing how to close out games is part of the learning process for his players.

“We’re later in the season but we’re still young,” Raper said. “There was a lot of decision-making (errors), especially on the fast-break opportunities — which is our game, which is what we want — and we really just made bad decisions. Left a lot of points on the floor that should’ve been on the scoreboard.”

Washington’s shooters, and in particular Jeremee Bryant and Omarion Blount, started the night off hot from behind the arc, drilling five 3-pointers in the opening quarter to help build a 21-18 lead heading into the second. The Pam Pack cooled off in the second, scoring just nine points to allow North Lenoir to take a 33-30 lead into halftime.

Twins Jeremee and Jamauri Bryant, who along with Barnes tied for a game-high 16 points, both scored eight points in the third to spearhead Washington’s high-scoring quarter. Blount added 11 points for the game and Kash Godley chipped in with five. The Pam Pack made six shots from 3-point land in the third period, and 14 for the whole game, but it wasn’t enough to overcome the Hawks.

Basketball Roundup: Tough night for the ladies while Seahawks soar