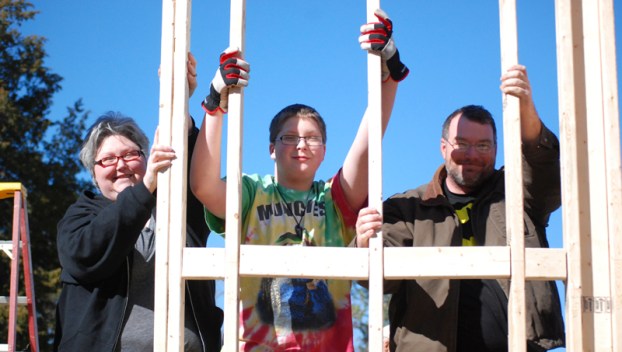 IN PROGRESS: (Left to right) Jamie, Logan and Glen Ivey hold up the first wall raised at their future Habitat for Humanity home. The Washington family, minus 2-year-old Adalyne, was on site last Saturday, assisting in the construction of their home. (Vail Stewart Rumley/Daily News)

It’s a simple, 1,250-square-foot home, 24 feet wide by 48 feet long, with an 8-foot-wide porch in the front, and sliding glass doors to a sunporch off the master bedroom in back.

At least it will be, when it’s finished. Last Saturday, the first wall went up on the future home of the Ivey family on Adams Street in Chocowinity. What’s special about the Iveys soon-to-be home is that it’s built through donations, by volunteers. For Habitat for Humanity of Beaufort County, the three-bedroom, two bath home marks somewhere around the 25th home volunteers have built in the county, according to Rich Neubert, Habitat for Humanity of Beaufort County’s building committee chairman. Nationwide, Habitat for Humanity builds more than 120,000 homes every year, he said.

Neubert and Habitat for Humanity of Beaufort County’s incoming President Feryl Masters were on scene last Saturday, along with about 20 volunteers, swinging hammers, cutting 2-by-4s and sharing construction advice. An engineer, a physician, a few retirees and a couple of teenage boys were among the volunteers helping to build the Iveys home. Neubert retired from a career as a stockbroker and has been volunteering with the organization for three years; Masters retired from Nutrien, still consults with the company, and has volunteered his time to build houses since 1991.

This construction crew is a combination of young and old, experienced builders and newcomers learning their way around the job site.

“I’ve built a lot of portfolios over the years, but I’ve never built a house,” Neubert laughed.

Neither have Jamie and Glen Ivey and their 16-year-old son Logan, yet they were there helping to lift and hold the framework of their future home’s first wall while it was being secured. 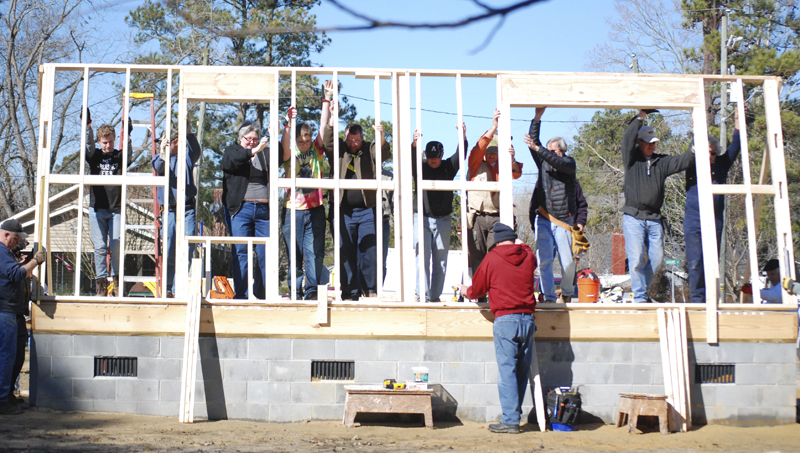 GOING UP: A crew of Habitat for Humanity volunteers, including the Ivey family, raised the first wall of what will be the Iveys three-bedroom, two-bath home on Adams Street in Chocowinity. (Vail Stewart Rumley/Daily News)

Jamie Ivey works for Physicians East in Greenville; Glen Ivey for the City of Washington’s maintenance department. Glen Ivey found out about the program through the city, but when they first applied in 2015, there was a waiting list.

“Last year, early spring, we were told we were getting a house,” Jamie Ivey said.

Since they lost their Greenville apartment to Hurricane Matthew in 2016, the family of four, which also includes 2-year-old Adalyne, has been living in a two-bedroom single-wide mobile home in Washington.

Habitat for Humanity selects homeowners based on three criteria: the applicants’ level of need, their willingness to partner with Habitat and their ability to repay a mortgage through an affordable payment plan. The organization depends on donations to fund housing and/or renovation projects, and relies on volunteers to get the job done.

“Nobody gets paid a penny. It’s all 100-percent volunteer work,” Masters said.

Some of that volunteer work is required from the future homeowners. In exchange for the house sold at cost and a 0-percent mortgage, the Iveys must volunteer 200 hours building their house.

“Not only do they contribute to the house but they learn something about it,” Neubert said.

While Hurricane Florence and Tropical Storm Michael slowed down construction last fall, Masters said their crew is working at a good clip now.

“If we finish this house by the end of March, Habitat will get back 90 percent of our money from State Employee Credit Union, which allows us to go right back to building another house,” Neubert said. “Otherwise, we’d have to wait about a year and a half to raise the money again.” 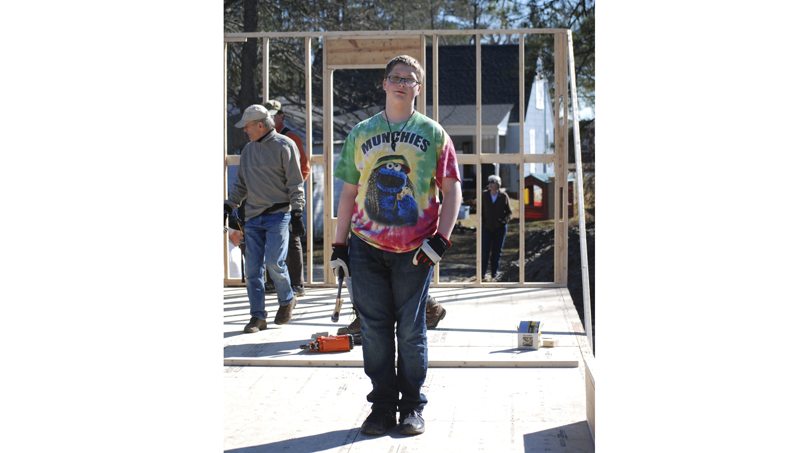 MY SPACE: Sixteen-year-old Logan Ivey said he’s very excited about getting his own bedroom — he’s pictured in the space where it will be. (Vail Stewart Rumley/Daily News)

Also in an effort to hit the end-of-March deadline, more volunteers are needed — especially those who have construction experience, Neubert said. However, all volunteers are appreciated.

“The people who build a house have a big hammer, but have an even bigger heart,” Neubert said.

Anyone interested in volunteering with Habitat for Humanity can call Rich Neubert, building committee chairman, at 252-975-1750. The organization also seeks monetary donations, as well as donations of buildable land, which is a tax write-off.

Pirates to sail the Pungo again

It’s been almost three years since the Jolly Rogers last flew over the Pungo River, but that’s about to change... read more