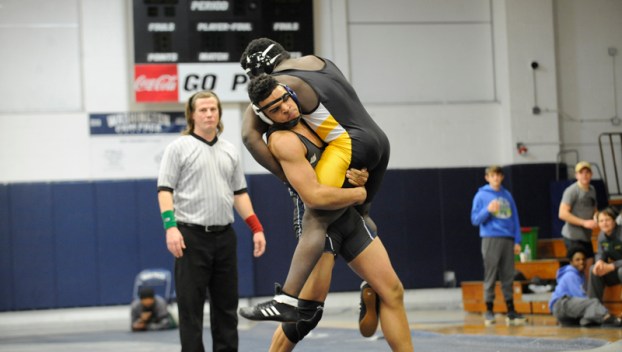 Pam Pack wrestling cruises to 3rd round of playoffs

WASHINGTON — The Washington wrestling team advanced to the third round of the dual team state playoffs after it knocked off North Pitt, 67-12, in the first round and followed that up by defeating second-round opponent Roanoke Rapids, 45-32, in front of a home crowd Tuesday night.

With a record of 31-5 entering the postseason, Washington was confident in its ability to book a spot in the third round.

“Tonight pretty much went like we thought it would, looking at who we were matched up with and you can kind of look online and see where they’re strong,” Pam Pack head coach Chris Penhollow said. “We matched up really well with both teams tonight, so everything came out pretty much what I thought.”

Washington opened the night by making light work of North Pitt. The Pam Pack only lost two of the 14 matches, while Khyric McCloud, Henry Jennings, Mykel Warren and Christian Whitney won by pinning their opponents, and Brodie Moore and Tristen Nixon won via technical fall (winning by at least 15 points).

It wasn’t completely smooth sailing for Washington, as Walt Gerard broke a tooth during his victory against North Pitt, creating a hole in the Pam Pack’s lineup and forcing several wrestlers to shift up a weight class against Roanoke Rapids. That made Penhollow cautious about picking up another injury, leading to Washington forfeiting the last several matches against Roanoke Rapids once it had enough points to assure victory.

“Once we got far enough ahead in that second match, I told my guys ‘Hey, once I know we can’t get caught, we’re going to forfeit out,’” Penhollow said. “Because you never know, some freak thing like we saw with him (Gerard) or a twisted ankle. So, we’d rather just save and be healthy for Thursday.”

There was a little bit of drama in the second round against the Yellow Jackets. Washington built a 15-0 lead, thanks to Isaac Campbell, Moore and Zack Warren, but Roanoke Rapids responded with a technical fall and a pin to cut the Pam Pack’s lead to 15-11. Perhaps reminded of last year when Washington was surprisingly eliminated in the second round by Croatan in a close match, the Pam Pack home crowd grew louder to amp up the team.

Ever confident in his wrestlers, Penhollow didn’t share the same apprehension.

“The fans get really excited but I knew what we had lined up and we were good,” he said.

Penhollow’s confidence was well placed, because thanks to Dylan Modlin, Davion Coward, Jennings, Mykel Warren and Whitney, the Pam Pack pinned five of its next six opponents to reach 45 points.

The two victories Tuesday set Washington to face the very team, Croatan, that knocked off Penhollow’s squad last year. It is a matchup the Pam Pack has been looking forward to all season.

“It’s exactly what we want. It’s kind of what we talked about the very beginning of the season. I feel like the two of us are the two best teams in the East,” Penhollow said. “Yeah, we’re looking forward to it. We’re going to see his (Croatan head coach David Perry’s) best shot and hopefully we can give him our best shot.”

Washington heads to Trinity High School today to take on Croatan at 6 p.m. The winner will compete in the regional round right after against the winner of Trinity and Ledford’s third-round match.