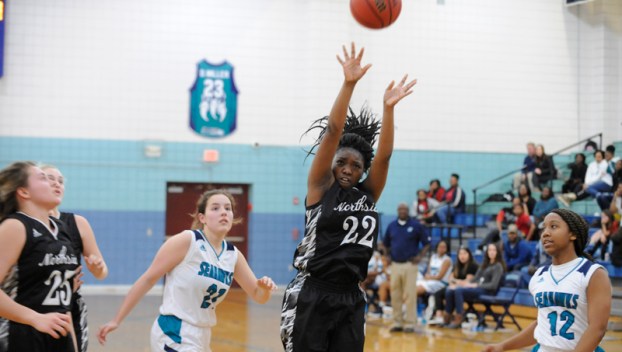 MORE OFFENSE NEEDED: Prentiss Thomas puts up a shot in a 51-38 win against earlier this season. Unfortunately for Thomas and the rest of the Northside Panthers, they struggled to score against Pamlico County Thursday night in a 57-16 loss. (Sean Finnerty | Daily News)

PINETOWN — Playing conference leader Pamlico County for the second time in seven days, the Northside girls basketball team once again found itself on the wrong end of a lopsided score, losing to the Hurricanes 57-16 at home Thursday night.

Northside head coach Michelle Leathers said she’s proud of the way her team played with effort on the defensive end, but recognized that they need to do a better job scoring the basketball. Putting the ball in the basket has been a struggle for the Panthers (5-7, 3-5 1A Coastal Plains Conference) as of late, averaging just 16 points per game the past three contests.

“We’re struggling scoring the ball, period,” Leathers said. “I feel like if you don’t have a shot, it’s time to start driving to the basket and make decisions. And that just comes from constantly playing the game of basketball.”

The Panthers didn’t score their first field goal until the 4:45 mark of the second period, which was their only field goal of the first half. Six of Northside’s eight first-half points came from the free-throw line.

On the other side for Pamlico County (15-2, 8-0 1A CPC), the Hurricanes put up 34 points in the first half due to a balanced attack. They combined for five 3-pointers with Madison Sadler draining three shots from behind the arc, and Jainaya Jones and Ashton Ramsey both each hitting one.

“We’ve kind of relied on a few players in the past to do the majority of our scoring,” Hurricane head coach April Rose said. “So this year we’re focusing on everybody being the best that they can be and doing well.”

The Panthers put up a valiant effort on the offensive boards in the second half, getting second and third-chance opportunities on nearly every possession. But the plethora of missed shots proved to be too costly, as the Hurricanes outscored Northside 23-8 in the second half to pull away and secure their fifth-straight victory.

Leathers said the Panthers will look to bring that same effort into future games with the hopes of getting back into the win column.

“Us playing hard is something we want to carry on to the next game,” Leathers said. We’ll continue to work on our 2-3-zone defense and hopefully get a chance to press a little bit more. So overall I see some good that can come out of it.”