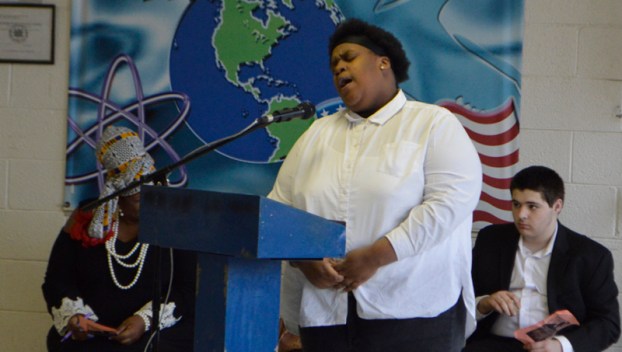 SINGING PROUD: Ed. Tech student Tionna Holland lifts her voice in song during the Black History program at the school on Friday. Holland sang a rendition of “You Made a Way.” (Matt Debnam/Daily News)

While many of the students who attend the Beaufort County Ed Tech Center have faced challenges and trouble in the past, a program on Friday morning reminded each of them they have plenty of reasons to hold their heads high.

Seven student volunteers, under Ed Tech Counselor Chynna Bonner’s direction, carried out the school’s annual Black History Month program along with a special guest from Greenville. From singing to speaking, each student played a part in delivering a message of pride and redemption.

“The only reason that we’re here today is because we’re standing on the experiences, challenges and lessons of our ancestors,” Bonner said. “We can learn from those.”

A student-shared moment during the program allowed Mitchell Satterthwaite and Zorriah Yarrell to share a lesser-known story from African-American history of Claudette Colvin, the predecessor to the more-famous Rosa Parks. Colvin, like Parks, also refused to give up her seat to a white passenger on a bus, a full nine months before Parks gained national attention for her actions.

“For those five or six kids to be leaders and stand tall that day, that meant a lot,” Bonner said. “To show their peers that it’s cool to participate, that was a lot for them to do that.”

In addition to the school’s students and staff, the program was well attended by leaders in the black community, including members of the Beaufort County NAACP. Among these leaders, NAACP President Pastor Aaron Lewis shared words of encouragement with the students.

The keynote speaker for the day, Rose Guya, is the owner of an event planning business in Greenville and an immigrant from Kenya. From her early days of dreaming big to becoming an independent business owner, Guya shared her own experiences and how she has learned about America’s black history as an outsider looking in and acclimated to American culture.

“I read books a lot, so I knew the history of black people in the United States,” Guya said. “At first I didn’t understand it, coming from where I was, because I wasn’t raised in that mindset of 400 years of slavery. That wasn’t my story. We were colonized by the British, but I wasn’t born during that time. So when I came to the United States, it was difficult to understand the racism.”

Her advice to students, while brief, was also deep. Guya encouraged the students to read books, arm themselves with knowledge, pick themselves back up after mistakes, treat people with respect and face their problems head on.

“I thought the message was especially fitting for my Ed Tech students because honestly, we get a bad rep,” Bonner said. “Just like the speaker said, ‘We’ve all made mistakes,’ so I want to encourage them to hold their heads up and stand tall.”

CHOCOWINITY — Six months after he assumed the title, Ralph Whitehurst has settled comfortably into his role as police chief... read more