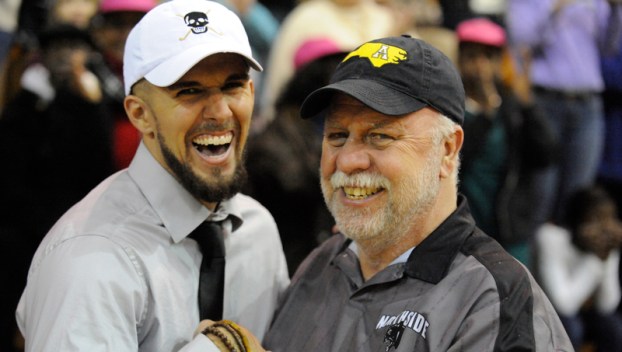 PINETOWN — It was an emotional night at Northside Friday night, as the former Panthers basketball coach, the late Mike Proctor, was honored by having the Panthers’ home court named after him. The Northside boys basketball team followed the court dedication ceremony by defeating Terra Ceia, 91-65.

Proctor died of cancer last August. He led the Panthers to the 1A East Regional final in 2015 and was the only varsity boys basketball head coach in Northside’s history when he passed.

“Coach Proctor and I coached at the same time,” Terra Ceia head coach Roger Klaassen. “In some years, I wasn’t about to compete with some of his teams when we played head to head. He was so dedicated to what he loved, which is basketball and this community. I’m honored that we got to play this game tonight in his honor.” 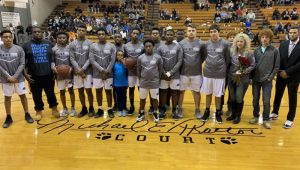 As for the game that followed, Northside (10-7, 4-4 1A Coastal Plains Conference) dominated after a slow start to blow out Terra Ceia (12-7, 10-2 1A NCISAA Tarheel Conference) by 26 points. The Knights got off to a hot start in the first quarter.

They went on an 8-0 run to start the game, as Northside turned the ball over a lot early. However, the Panthers settled down and dictated the pace for the rest of the opening stanza. A 24-6 run gave them a 10-point lead at the end of the first.

“We had to slow down,” Northside head coach Jared Adams said of his team’s slow start. ”Our pace was too fast and it caused a lot of turnovers. Once we slowed down, we played a fluid game and scoring came natural to us. This led to our lead growing as the game went on. Anytime you get a win, it helps the team become more confident and that’s what you want to do in the biggest moments of the season.”

From there, the duo of Rashod Smith and Johnathan Clark began to take over the game. The Panthers forced a lot of turnovers in their press, which led to a lot of run-out baskets. Matt Van Staalduinen kept the Knights in the game by hitting a couple of 3-pointers, but Northside eventually pulled away. The Knights watched the Panthers’ lead grow from 10 to 25, but eventually Northside had to settle for a 55-31 lead at halftime.

“They sped the game up on us,” Klaassen added. “We turned the ball over after we started so well, and we weren’t used to their pace. This is a game where we learned what we have to do to be a better team. If we can compete like this in the conference tournament next week, we’ll do good things. We played a much better second half when we were composed. We’re a young team that competes hard, and this was a great test for us tonight.”

While Terra Ceia played a much better second half, Northside answered every run the Knights had. The Panthers led by 25 at the end of the third quarter and didn’t look back from there. Smith continued his scoring tear with 27 points on the night. Kenneth Winfield added 20 and Clark chipped in with 19 for the Panthers. Terra Ceia’s Matt Van Staalduinen led all scorers with 32 points, and sophomore guard Gunner Couch had 14 for the Knights.

Despite the final score, Friday night was about something bigger than a game. It was a night to remember someone who meant the world to a great community. Adams, who played for Proctor at Northside before serving as his assistant coach, echoed those sentiments after the game.

“It shows that although he’s not with us anymore, he’ll always be in our hearts,” Adams said of his former high school head coach. “This ceremony reminded us of a family-like atmosphere with all of that shown by the community. Every year, it felt like he had a team that made it to regionals, and he led us to a state title appearance in 2001. For 30 years, he brought his heart and soul to this school and this community.”

Terra Ceia is taking part in the TIC conference tournament, which began last night at Pungo Christian with a matchup against Lawrence Academy. Northside hosts South Creek today at 7:30 p.m.