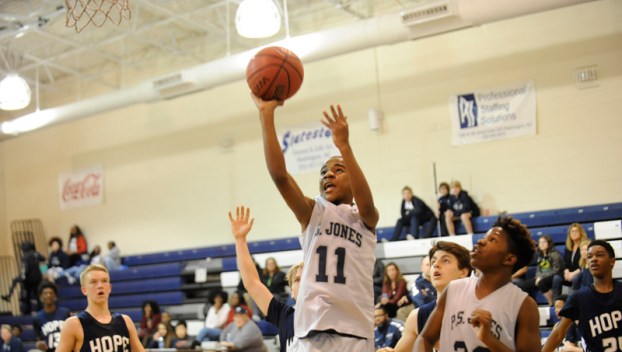 NOTHING BUT NET: Jalyn Lampkins puts up a shot after scything his way through Hope’s defense Monday evening. (Sean Finnerty | Daily News)

WASHINGTON — It was a tough outing Monday evening for the P.S. Jones Middle School basketball team as it fell to Hope Middle School, the second-place team in the conference, 77-43, at home.

For much of the game P.S. Jones (4-7) had trouble dealing with Hope’s (11-1) full-court press. The Mustangs, who trail only undefeated Farmville Middle School in the conference standings, frustrated the Demons all game, coming away with steals and forcing ill-advised passes that Hope picked off and converted into easy layups in transition. Using that formula, the Mustangs simultaneously limited P.S. Jones’ offensive production — holding the Demons to 10 and nine points in the first and second quarters, respectively — while also putting up 25 points in the opening quarter and 21 more in the second. Hope also used smart passing and good movement off the ball to create open looks at the basket.

When P.S. Jones did manage to break Hope’s press, the Demons finally got a chance to show what they could do. Guard Jalyn Lampkins, who finished as P.S. Jones’ leading scorer with 12 points, showcased his dribbling skills, weaving his way past Hope defenders to score at the basket or dish off to an open teammate.

Zy’Mari Perry and Gary Payne both established a presence in the paint for P.S. Jones, grabbing rebounds and swatting shots. Unfortunately for Perry, Payne and the rest of the Demons, the Mustangs were so alert with their off-the-ball movement, a Hope player was often in the right spot to clean up after a Perry or Payne block.

Trailing 46-19 at halftime, the Demons responded with their best quarter of the game when play resumed in the third quarter. With both Payne and Lampkins taking turns bringing the ball upcourt, P.S. Jones broke through Hope’s press much more frequently, scoring 17 points in the period while limiting the Mustangs to 11.

Lampkins led the offensive charge, splashing a pair of 3-pointers in the quarter, while also creating for teammates, like Christian Norman, K.J. Moore, Payne and Perry, off the dribble.

However, P.S. Jones couldn’t carry over its momentum into the fourth. Hope’s press became effective again in the final period, and the Mustangs increased their lead even more.

Lampkins finished as the Demons’ leading scorer, while Perry contributed nine points, Payne scored eight, Norman had six and the trio of Hunter Baldree, Nash Pippin and Moore all had two points.

P.S. Jones will wrap up the season tomorrow when it travels to Greenville to play E.B. Aycock, which sits behind the Demons in the conference standings.

WASHINGTON — After falling behind by 14 points heading into the final quarter, the P.S. Jones Middle School girls basketball... read more