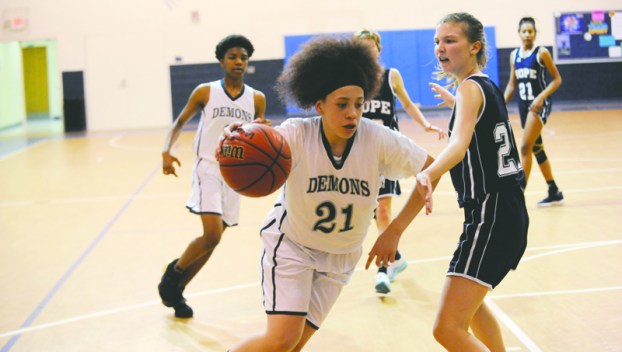 The Demons (5-6) had trouble scoring through the first three quarters and trailed Hope (11-1), 31-17, heading into the final stanza. P.S. Jones could have easily rolled over and taken the loss from the conference-leading Lady Mustangs, but the Demons had no such ideas. Instead, P.S. Jones responded with its best quarter of the game, scoring 15 points, while holding Hope to just six.

Haley Whitley, who scored six of her team-high 14 points in the fourth, spearheaded P.S. Jones’ rally. She was a force in the paint as her teammates repeatedly fed her the ball. The Lady Mustangs couldn’t cope with Whitley in the last period, often resorting to fouling. When she wasn’t going to the free-throw line, Whitley was either getting a shot off or bringing down offensive rebounds to extend possessions.

Not only were the Demons finally putting some points on the board; they also came up with crucial stops on defense. P.S. Jones didn’t allow Hope to score through the first two minutes of the fourth quarter, opening the period on an 8-0 run. Tanaja White, who scored all five of her points in the fourth, stole the ball on a Hope outlet pass and drained a 3-pointer to make the score 31-25 with 3:55 left. 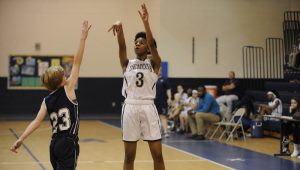 Hope answered right back to finally score in the fourth and scored on its next possession to push its lead back to 10 points with 3:20 left in the game. Triniti Burke dribbled coast to coast to score on a layup, Katlyn White scored on a fast break and Whitley hit a free throw to bring P.S. Jones with five points with 1:41 left. But sadly for the Demons, that was as close as they got, as Hope closed out the game from there.

The game opened as a close affair, with Hope holding a 6-4 lead after the first quarter. The Lady Mustangs proceeded to take control of the game in the second and third quarters, locking down the paint and pressing P.S. Jones into turnovers in the process.

Whitley led the way for the Demons scoring-wise, while Burke chipped in with eight points, Tanaja White finished with five, Katlyn White had two and Avery Thomas scored a point from the line.

P.S. Jones travels to Greenville tomorrow to take on E.B Aycock, which sits a game behind the Demons in the conference standings.

Pungo breezes into semifinals with win over Albemarle