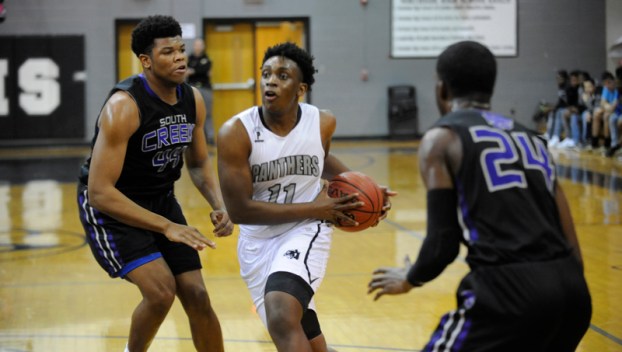 PINETOWN — Led by the backcourt duo of Rashod Smith and Johnathan Clark, the Northside boys basketball team jumped out to an early double-digit lead over South Creek at home Tuesday night and coasted to a 78-55 win, snapping its three-game losing streak against conference foes in the process.

“We hit a little slump there; lost three in a row in conference. We’re getting better defensively and we know as a team, it’s not how well you’re playing at the beginning of the season, but how well you’re playing towards the end,” Northside head coach Jared Adams said. “And tonight, we moved the ball well offensively, got out to a good lead; I was able to get some guys in (the) rotation. They kind of took over, filled the same shoes and we played team basketball, from man-one to man-eleven on my roster.”

The Panthers (11-7, 5-4 1A Coastal Plains Conference) pounced on South Creek (1-18, 1-8 1A CPC) from the very start, building a 13-2 lead with 4:13 still remaining in the opening quarter. Northside scored its points in a number of ways in the early goings, whether directly off of an inbound pass, in transition after stealing the ball or hitting shots from distance.

The one constant was Smith’s involvement. The junior guard was in a giving mood early, setting up the likes of Tyler Turner, B.J. Paniagua, Zach Green and Clark for baskets. Clark, who finished with 19 points, dished out his fair share of assists as well, often with a no-look or behind-the-back pass.

Adams said Smith’s plethora of assists was due in part to the practice the Panthers have put in recently.

“He’s (Smith) just a floor general and he’s always constantly looking inside. But a lot of times the inside hasn’t been there because we’ve been out of position,” Adams said. “So we really worked on getting in position, calling out our picks and screens, really identifying who’s going to flash, and that allowed him to get some feeds inside early.”

While Smith and Clark were dealing out assists, Turner and Paniagua did the dirty work inside, grabbing rebounds on both ends of the court. They were rewarded for their efforts, as Paniagua was set up to score four points — all in the first quarter — while Turner scored eight points through the first two quarters to finish with 10.

Leading 21-9 after a quarter of play, the Panthers mounted the pressure on the Cougars, scoring 25 more points in the second, while limiting South Creek to adding 11 points. Green, who scored 16 points in the game, led the charge in the second, hitting a pair of 3-pointers and putting up 10 points in the period. Green also found success making baseline cuts to score, taking advantage of all the attention South Creek defenders paid to Smith and Clark when either of them had the ball.

Northside led, 46-20, heading into the third, which is when Smith decided to get in on the scoring action. After helping set up teammates to score in the first half, Smith exploded for 12 points in the third period to finish with a game-high 22 points. Omari Crandell, Kenneth Winfield and Zakkai Wilson also got their names on the score sheet in the latter stages of the game, finishing with three, two and two points, respectively.

Northside welcomes the Tarboro Vikings to Pinetown tomorrow at 7:30 p.m. looking to avenge an earlier loss at Tarboro. A Panthers’ win would push them to just a half-game behind the Vikings in the conference standings.