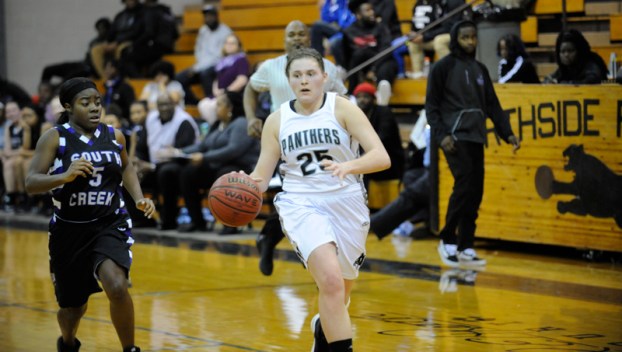 The Seahawks defeat Jones Senior in a nail biter

TRENTON — The Southside boys basketball team picked up its first conference-win of the season in exhilarating fashion Tuesday night, knocking down a free throw in the final seconds to take the lead before swatting a last-gasp Jones Senior shot to seal the 62-61 road-victory.

Jamari Nelson provided the late-game heroics for the Seahawks (5-14, 1-8 1A Coastal Plains Conference), hitting the go-ahead free throw with 0:7.8 left in the game, right after Southside head coach Sean White called a timeout to setup his team’s defense for the Trojans’ rebuttal. Nelson also used his length to block Jones Senior’s (3-15, 2-8 1A CPC) final shot attempt, clinching the victory.

After trailing 15-10 at the conclusion of the first quarter, the Seahawks used a dominant second period to take control of the game. Jalen Kirkman, Kevin White and Ty Smith led the way, scoring 10, seven and six points, respectively, in the quarter, as Southside scored 23 points and limited the Trojans to 10. The 33-25 lead Southside built by halftime was just enough to hold off Jones Senior, which actually outscored the Seahawks, 36-29, in the second half.

The Seahawks welcome the Riverside Knights, who’ve dropped only one conference-game this season, to Southside tomorrow night.

Lady Seahawks back to winning ways

TRENTON — On the road and trailing by seven entering the fourth, the Southside girls basketball team responded with its best quarter of the game to defeat Jones Senior, 54-49, Tuesday night, snapping the Seahawks’ three-game losing streak.

The Seahawks played a much cleaner game compared to their recent outings, turning the ball over just 12 times. On the flip side, Southside also registered 14 steals, with Blango’s five steals a team-high.

Southside will next play Riverside, the No. 2 team in the CPC, tomorrow at 6 p.m.

PINETOWN — Falling behind by nine points early in the fourth, the Northside girls basketball team clawed its way back to trail South Creek by a solitary point with just over three minutes left in the game. But the Panthers couldn’t make the necessary plays late, falling to the Cougars at home Tuesday night, 49-43.

After finishing the first quarter tied at 8-8, Northside (6-8, 3-6 1A Coastal Plains Conference) found itself trailing for much of the game. But the Panthers always kept themselves within striking distance. South Creek (3-16, 1-8 1A CPC) would periodically stretch its lead to eight or nine points, but Northside would shrink it back down to three to five points. Much of the second half followed that pattern.

Unfortunately for Northside, South Creek’s Keary Jones took the game over in the final period, scoring 14 of her game-high 30 points in the fourth quarter. While Jones poured in the points in the final minutes, Northside’s offense hit a rut, scoring just four points over the final 3:25 — including a corner-3 from Gabby Slade with three seconds left in the game.

Next up for Northside is a home game against Tarboro tomorrow at 6 p.m.

WASHINGTON — It was a tough outing Monday evening for the P.S. Jones Middle School basketball team as it fell... read more