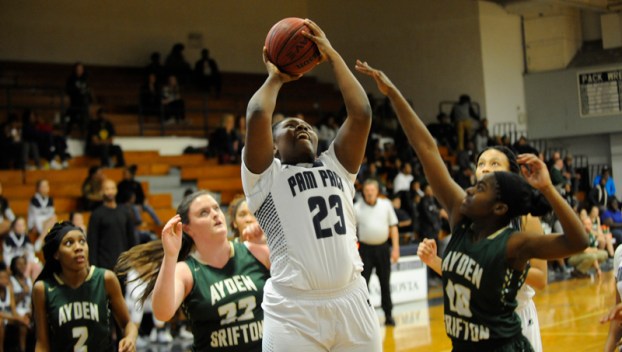 GOING UP STRONG: Daria Jones puts up a shot in the paint last week as Ayden-Grifton defenders try futilely to stop her. Jones scored nine points Wednesday night at South Lenoir, including four points in the fourth to stave off the Blue Devils’ rally. (Sean Finnerty | Daily News)

DEEP RUN — In a pivotal game between the conference’s No. 3 and No. 4 teams, respectively, the Washington girls basketball team prevailed over South Lenoir, 52-47, Wednesday night in Deep Run. Both teams needed a win for their state tournament aspirations. While the Blue Devils made a late run to keep it interesting, it was the Pam Pack who held on in the end.

“It was one of our biggest wins of the season,” Washington coach Ralph Biggs said. “Our girls played smart enough to hold on, but we really deserved this one. We’ve been wanting to build every year. This game was the culmination of our efforts.”

Washington (10-8, 6-4 2A Eastern Carolina Conference) started the game off hot, making an early first-quarter run to go up 10-2 in the game’s opening minutes, thanks in part to a pair of 3-pointers from Kiaira Boomer. Although South Lenoir (10-10, 4-6 2A ECC) started cold, Washington couldn’t pull away from them in the first few minutes. The Blue Devils found themselves trailing 12-4 at the end of the first, but they started to pick it up before halftime.

“We didn’t have an answer for their size,” Blue Devils head coach Donald Mooring said. “It was tough to dig that hole and then come up short after a great comeback. One thing I know about my seniors is that they will compete every second of the day. We really wanted this one for them.”

Two South Lenoir 3-pointers cut into the deficit early on in the second period. However, Washington managed to keep their lead and with help from Reagan Ruther’s six points in the quarter, temporarily pushed it up to double digits. In the end, the Blue Devils played a spirited second quarter, but couldn’t take advantage of the good shots they were getting. The Pam Pack also missed some easy looks at the rim, but still held a 24-16 halftime lead.

The Pam Pack added to its lead in the second half through the play of Ruther and Daria Jones. Ruther, a sophomore forward, got a lot of easy baskets in transition to add to Washington’s lead. When the third period came to a close, the Pam Pack held a 39-27 lead. However, South Lenoir didn’t go down without a fight.

After trailing by 15, the Blue Devils cut their deficit to four with less than two minutes left in the game, but didn’t get any closer. Washington iced the game with some clutch free-throw shooting, with Briasia Somerville hitting four free throws in the last 30 seconds to seal the victory.

Washington will celebrate its own Senior Night Tuesday, when it hosts conference-leader Kinston at 6 p.m.

“It’ll be a big game on Senior Night against Kinston,” Biggs said. “We can match their speed and athleticism, but we’re going to have to match their toughness to have a chance.”