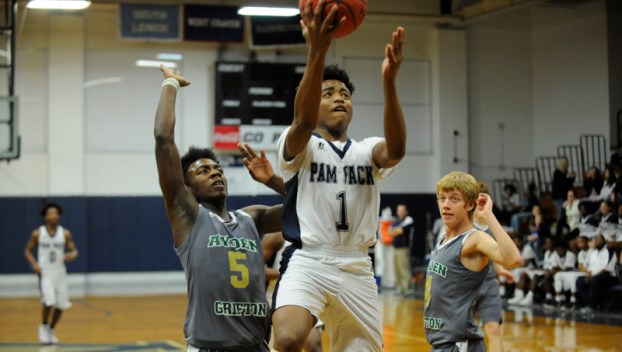 DEEP RUN —It was Senior Night in Deep Run, so all of South Lenoir’s athletes from the winter sports season were honored before Wednesday’s varsity boys basketball game. Unfortunately for the Blue Devils, the festivities were spoiled by a hot start from the Pam Pack, which doubled its conference-win total with a 77-55 victory.

Washington (6-12, 2-8 2A Eastern Carolina Conference) got off to a 12-0 start in the first quarter. South Lenoir (4-16, 1-9 2A ECC) started a lineup of five seniors and mixed in their regular rotation players as the quarter went on. The only problem was that they didn’t score in the first quarter. That’s not an error. Washington led 17-0 after eight minutes of action on the Blue Devils’ Senior Night, thanks in part to a trio of 3-pointers made by Omarion Blount in the game’s first stanza.

“I’ve never seen that before,” Blue Devils head coach Jeremy Barnett said. “I don’t think I’ve ever been a part of a team that didn’t score in a quarter. We started a lineup of seniors and they deserved to get a chance out there. When I put in my regular starters, it didn’t get any better. We’re not gonna win games giving up over 77 points.”

As a matter of fact, the Blue Devils didn’t score their first points until the 6:05 mark of the second quarter. Defense hasn’t been much of a strength for Washington this season, evidenced by the 750 points it’s given up in conference play — the highest amount of any team in the seven-team league. But Pam Pack head coach Lane Raper noticed something that worked defensively the first time these teams met this season and went with it again in the rematch.

“We started in 2-3 zone. We used that defense against them the last time and it frustrated them,” Raper said. “When we play with energy and effort, we can be really good defensively.”

Meanwhile, the Pam Pack ended up scoring the first 22 points of the contest. South Lenoir went on a 9-0 run midway through the second quarter to cut into the deficit. However, Washington still held a 29-17 lead at halftime.

The Pam Pack continued adding to its lead in the second half, scoring 24 points in both the third and fourth quarters. South Lenoir played with a lot of fight after the first quarter, but the Blue Devils’ deficit went over the 20-point mark early on in the third. South Lenoir continued its attempt to climb out of its hole, but Washington didn’t let up and led 53-37 at the end of three.

In the end, Washington spoiled South Lenoir’s celebration of its seniors. The big lead the Pam Pack created early held up for Washington’s second conference-win of the season, both of which were 22-point victories over the Blue Devils.

Blount led the way with 23 points for the Pam Pack, while Jeremee Bryant added 13 and Justin Powell had 11. Jadan Hambric and Terry Moore both finished with seven points, Jordi Barnes contributed with six, Kash Godley and Jayshawn Blackledge each had four points and Omarri Blount scored two points.

The win snapped a run of five consecutive losses, including a heart-breaking defeat at the buzzer against Ayden-Grifton last week, for Washington. Raper said the victory also bolsters his team’s chances of qualifying for the conference tournament.

“This team hasn’t made the conference tournament in a long time and we want to get there,” Raper said. “A win like this really helps our chances to make it there. We’re hot from the outside right now and if we can keep shooting the ball well, we’ll be in a good spot for our next two games.”

The Pam Pack will return to the court Tuesday, when it welcomes Kinston to Washington for its own Senior Night.

By LAIEKE ABEBE From the Kinston Free Press DEEP RUN — In a pivotal game between the conference’s No. 3... read more