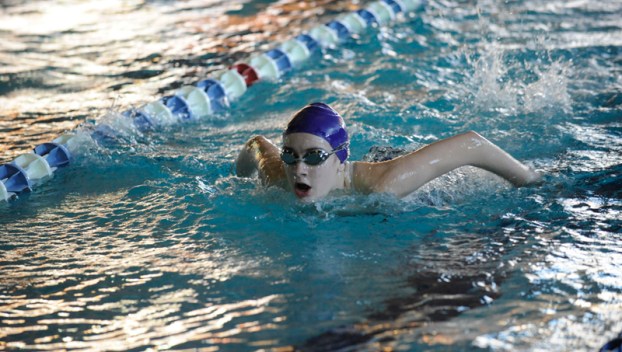 HEADING TO THE STATE CHAMPIONSHIP: Washington’s Anna Yoder swims the butterfly portion of the 100 butterfly at a meet earlier this year. Yoder is one of 10 Pam Pack swimmers, along with Darah Cole from Southside, who qualified to compete in the state championship in Cary. (Sean Finnerty | Daily News)

In what may seem like a case of déjà vu, the Washington swim team is once again sending a strong group to compete in the state championship in Cary today.

10 Pam Pack members, along with Southside’s Darah Cole who practices with Washington, made the trip to last week’s 1A/2A East Regional, where the contingent from Beaufort County took on the best swimmers in the East. When the water finally calmed down after a day full of races, all 11 swimmers finished among the top eight in their respective races to earn a trip to compete against the finest high school swimmers from across North Carolina.

Washington head coach Kaitlyn Richards said she was impressed with how well her swimmers performed at last week’s regional meet, which was also held in Cary.

“That was really exciting because obviously I always expect the best and am hopeful for their best performances, but they just blew it out of the water. I mean, every single person that swam improved tremendously in everything they swam,” Richards said. “We were really lucky because everybody that competed at regionals made it to states, at least in one event. As a coach, you can’t ask for more.”

Washington placed seventh overall at regionals, with the boys team scoring 174 points to take fifth among the boys, and the girls scoring 70 points to take 11th among the girls teams. Cole, Southside’s only swimmer, scored 18 points by herself, finishing eighth in the 100 backstroke and 10th in the 50 freestyle.

Tristan Pake was Washington’s highest finisher, winning the 100 butterfly with a time of 56.34 seconds.

“It was a beautiful swim; it was perfection. He’s actually placed eighth going into states, so technically he’s in what would be the final heat. So we’re really hoping that he can bust it out and just really perform well in that and go a little further if he can,” Richards said.

As Southside’s only swimmer, Cole trains alongside the Pam Pack. With all the time spent with her, Richards said she claims Cole “as one of ours.”

“We’ve known Darah for a very long time and it’s been really special working with her because, although she’s not with us, it’s always felt like she’s part of our team,” Richards said. “Because she is the only swimmer for Southside, she doesn’t have the opportunity to do relays and things like that to really give her more of a chance to swim in events like that. So the fact that she made it on her own to states is just amazing on its own, and it was really special to see her face when we told her she was going to states, when she didn’t think she made it.”

Since qualifying for the state championship, the Pam Pack and its adopted Seahawk have been hard at work preparing. The swimmers have been working on details such as starts and turns, and asking Richards and East Carolina Aquatics’ Scott Pake, who coached Richards in her competitive days and has been helping out, questions to perfect every possible detail.

“They’re very eager; they’re ready. I guess I would say they’re hungry for the competition,” Richards said. “They’ve worked just extremely hard and they’re listening to what we’re telling them and they’re really applying it.”

The 1A/2A State Championship meet begins today with preliminaries at 9 a.m. at Cary’s Triangle Aquatic Center. The top-16 swimmers per each event move on to the finals at 4:45 p.m.

By LAIEKE ABEBE From the Kinston Free Press DEEP RUN —It was Senior Night in Deep Run, so all of... read more