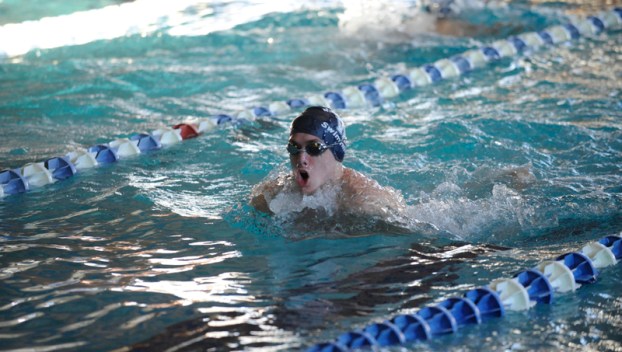 CARY — Powered in part by a sixth-place finish in the men’s 200 medley relay, the Washington swim team concluded a long day Saturday at the 1A/2A State NCHSAA Championships with a 11th-place finish out of a field of 46 teams consisting of the top swimmers from across the state.

“I think it was a really great way to end the season. It was a really long day of swimming; the kids were really tired, but they really pulled out some great swims,” Washington head coach Kaitlyn Richards said. “I was very impressed with (placing 11th out of 46 teams), considering that the points were solely based on the boys. So six swimmers scored that many points to get us 11th place; that’s very impressive.”
The men’s 200 medley relay team of Tristan Pake, Patrick Lovenberg, Hodges Tubaugh and Tripp Pippin gave the Pam Pack its highest finish of day, coming in sixth. Pake, Lovenberg and Tubaugh teamed up with Braeden Beach to finish eighth in the men’s 400 freestyle relay. In Washington’s other relay races, Allen Crisp, Beach, Pippin and Lovenberg placed 16th in the men’s 200 freestyle relay, while Grayson Spruill, Tianna VanCura, Anna Yoder and Claire Shepherd came in 21st-place in the women’s 200 freestyle relay.

Tubaugh provided the Pam Pack with its highest individual finish, placing eighth in the 100 freestyle, while also coming in eleventh place in the 50 freestyle. Pake tied for ninth in the 100 butterfly and finished 13th in the 200 individual medley. Southside’s Darah Cole, who as Southside’s only swimmer trains with Washington, placed 23rd in the 100 backstroke.

In just her second year as Washington’s swimming coach, Richards was proud of how her team fared this season, and all the work her swimmers put in to better themselves and end the season on a good note.

“They did a really great job this season; I was impressed with the kids,” Richards said. “They definitely had more drive than I was expecting. Even throughout exams and holidays and things like that, they really just worked hard to finish off the season in a positive way. I was very grateful for the time we had together and very impressed with all the work and effort they put in this year.”

In what may seem like a case of déjà vu, the Washington swim team is once again sending a strong... read more