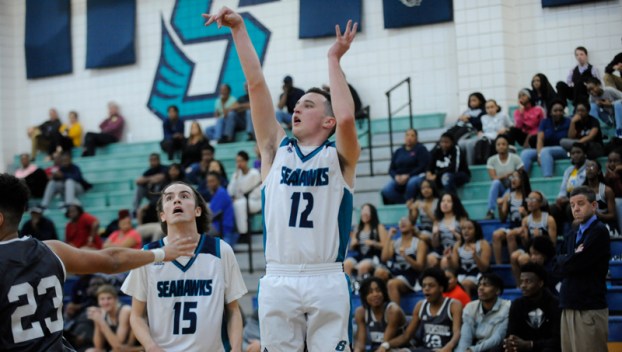 FINAL HOME GAME: Southside senior Kevin White follows through with a shot from behind the arc during Friday’s game against Riverside. White, along with Jalen Kirkman, Luke Matthews, Hunter Tyler and Damaujae Brown were honored before the game in a Senior Night ceremony. (Sean Finnerty | Daily News)

CHOCOWINITY — All of Southside’s senior winter-sports athletes were honored before the Southside boys basketball team’s game against Riverside Friday as part of the Senior Night festivities. Unfortunately for the Seahawks, the feel-good atmosphere disappeared when play began, as the Knights stormed out to an early double-digit lead and handed Southside an 82-52 loss.

Opening the game with an all-senior starting five consisting of Damaujae Brown, Kevin White, Jalen Kirkman, Luke Matthews and Hunter Tyler, Southside (5-15, 1-9 1A Coastal Plains Conference) had issues coping with the size, speed and overall physicality of Riverside (14-7, 9-1 1A CPC) all night long. The Knights punished the Seahawks in transition, whether off of a turnover or after a rebound. Riverside built a 20-10 lead by the end of the first and pushed it to 42-19 at halftime.

Southside showed some fight and energy in the second half, scoring 17 points in third and 16 more in the fourth. Unfortunately for the Seahawks, the Knights didn’t suffer much of a dip in offensive production, scoring 40 second-half points.

Kirkman and Ty Smith led Southside with 10 points apiece, while White scored nine points, Jamari Nelson, Hundley Stallings and David Albritton each scored five, Brown and Aeron Wright both chipped in with two points, and Tyler and Marcus Budbill each scored a point from the line.

After playing at rival Northside last night, the Seahawks wrap up their regular season with an away game at South Creek Friday.

CHOCOWINITY — Prior to tip-off between the Southside girls basketball team and Riverside Friday, a touching ceremony was held in honor of the Lady Seahawks’ former coach Bill Lake, who died in 2017. Southside didn’t appear ready when play finally began, going scoreless through the opening quarter on the way to a 61-16 loss.

Southside (8-10, 3-7 1A Coastal Plains Conference) lacked sharpness from the start, gifting the ball to Riverside (16-5, 9-1 1A CPC) through turnovers and shooting poorly. The Knights built a 14-0 lead by the end of the first quarter and pushed it to 23-0, before Shantel Cannon hit a 3-pointer to finally get the Seahawks on the board with 6:04 left in the second. Things didn’t get much better for Southside, as it trailed 34-9 at halftime, before adding seven more points in the second half.

Cannon led the Seahawks with 11 points, draining three 3-pointers along the way. Zarie Cobb scored three points at the free-throw line, while Miasia McCall and Laquisha Woolard each scored one point.

After playing at Northside last night for the Panthers’ Senior Night, Southside puts the finishing touches on the regular season with an away game against South Creek.

PINETOWN — While not at its high-scoring best Friday night, the Northside boys basketball team locked in on defense to come away with a 64-50 win at home over Tarboro.

As a team that averages 78.5 points per game, Northside (12-7, 6-4 1A Coastal Plains Conference) couldn’t quite get up to speed on the offensive end against Tarboro (13-7, 7-4 1A CPC). But on the other hand, the Panthers limited the Vikings, who average 66.8 points per game, to more than 16 points below their season average.

The game was tight in the early goings, with Northside holding a 20-19 lead after a quarter of play. The Panthers then exploded for 25 points in the second stanza, led by Johnathan Clark’s 10 points in the quarter, to take a 45-28 lead into halftime.

After scoring nine points in the second, Tarboro responded with an 18-point third to come with 10 points of Northside. The final period had the least scoring of them all, as Northside scored eight points, but held the Vikings to just four.

PINETOWN — Overcoming a slow start Friday night, the Northside girls basketball team bounced back to take the lead at halftime and held off a Tarboro rally in the fourth quarter for a 38-35 victory.

Northside (7-8, 4-6 1A Coastal Plains Conference) put itself behind the eight ball early, mustering just four first-quarter points, while Tarboro (12-10, 6-5 1A CPC) scored 11 to hold a seven-point lead after a quarter of play. The second period saw a role reversal, as the Panthers scored 11 points and held the Vikings to just three. Ve’Era Holloway led the charge for Northside scoring seven of her game-high 12 points in the stanza.

The Panthers continued increasing their lead in the third, putting 11 more points on the scoreboard, while limiting Tarboro to six points. That gave Northside a 20-26 lead going into the final quarter. The Vikings staged a comeback attempt, putting up 15 points on the board, but the Panthers did just enough to come away with the win.

Joining Holloway in the scorebook were Gabby Slade with nine points, Alexia Somers with six, Katie Godley and her five points, Prentiss Thomas who scored four points and Jessica Foster with two points.

NEWPORT — After getting knocked out of the third round of the dual-team state playoffs in heart-breaking fashion by Croatan... read more