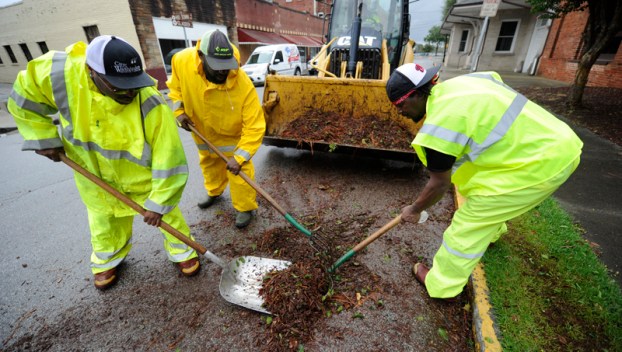 A CONSTANT PROCESS: Among the top priorities for the Washington Public Works Department is finding ways to address drainage issues throughout the city. Since the first of the year, the department has cleared debris and sediment from nearly 22,000 feet of drainage ditches in the city. Here, Public Works employees clear debris left by flooding during Hurricane Florence. (Ashley Vansant/Daily News)

For those curious about the direction the City of Washington is headed in the next year, Tuesday night’s City Council meeting was a good place to start. Prior to the group’s regular meeting, council members reviewed a set of 20 goals on the priority list for city staff, receiving updates on each. The goal setting/review sessions became a quarterly occurrence for the council last spring, allowing the group to better keep a finger on the pulse of city issues than the previous, annual goal-setting format.

At the top of the current list are two items regarding the city’s drainage system. These goals include formulating a plan to prioritize ditch cleaning in more than 12 miles of ditches throughout Washington’s service area. Since Jan. 1, public works crews have removed debris from more 21,922 feet of ditches in the city, with most of the work being done by hand. Additionally, the Public Works department is in discussions with the N.C. Department of Transportation to assess drainage issues on and under city roads.

Also ranking high on the goal list is a plan to move forward with closing on a site for the new police station at the former site of Roberson Beverage on Bridge Street. Geotechnical testing of the soil at the site is still needed to proceed.

Planning goals include a review of the Historic Preservation Commission guidelines, reviewing zoning ordinances and restrictions on the use of sidewalks, with an eye toward Streetscape development. Major projects underway for the electric department include a rebuild of the Slatestone Road substation and projects at Avenue and Cherry roads.

Other goals include efforts to increase communication with the public, updates to administrative policies, an ongoing list of city streets to be resurfaced through 2028 and a hanger construction project at Washington-Warren Airport.

Recently completed milestones include the completion of the pier at Havens Gardens and the debugging of the city’s financial software.

In addition to goals developed by council members and city management, the session also included goals that have been developed by various city departments. These included:

Human Resources — Work with managers to finalize minimum qualifications for each city job and design a structured interview process for candidates.

Information Technology — Redesign city website, which has been online in its current format for eight years. Implement networking that will allow city cameras, including police body cameras, to be viewed via a centralized video display at the Washington Police Department. Potentially use waterfront Wi-Fi to add security cameras to help WPD respond to areas with known issues. Both projects are included in the 2020 capital improvement plan and will be included in the 2019-20 budget.

A full update on the city’s goals and priorities can be found under the Feb. 11, 2019 agenda at www.washingtonnc.gov/meeting-agendas.

Subpoena of voting records reduced to 289

A request by the U.S. Attorney’s Office for millions of voter records in 43 North Carolina counties has been scaled... read more