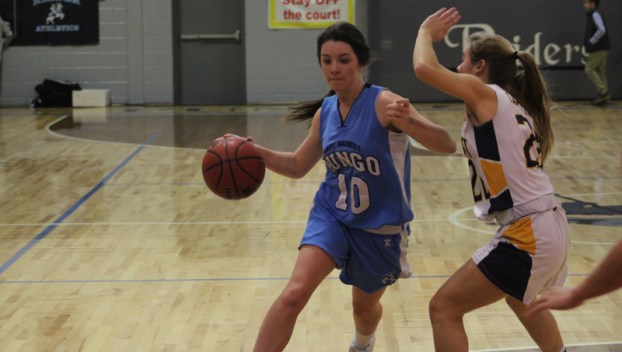 BELHAVEN — The Pungo Christian girls basketball team lost three times to Ridgecroft in the regular season including a two and three-point loss. However, when it really counted, it was the Raiders who got the last laugh over the Rams.

Pungo won its first Tarheel Independent Conference Championship in 20 years with a 43-29 win over Ridgecroft on Saturday. After losing twice to Ridgecroft, the Raiders pulled out a huge win on their home court to seal the deal.

“Our fans are number one,” tournament MVP Lauren Kellie Ricks said. “The crowd helps us a lot and they’re basically the sixth man for us. Hopefully it gets more girls to play basketball and we want them to be encouraged to try it out.”

It was an intense first half from both teams and the crowd was excited that a classic was on its hands. The Raiders (21-4, 10-2 1A TIC) came out ready to play early in the game with some tenacious defense and rebounding. The tone was set by the play of Ricks, who had a dominant performance with 24 points and 16 rebounds.

An Emma Allen 3-pointer at the first quarter buzzer gave the Raiders a 16-5 lead at the end of the first quarter. The score could’ve been closer, but the Rams (19-4, 11-1 1A TIC) left a lot of points on the free throw line in the first eight minutes; this was a recurring theme for Ridgecroft throughout the game.

Both teams went cold in the second quarter, but Ridgecroft couldn’t take advantage of the Raiders’ dry spell. Free-throw shooting once again became key, as Pungo hit a few in the second to keep its lead at double digits. The Raiders led 23-12 at halftime.

The Rams didn’t go away in the third quarter. After seeing their lead dwindle to four points, the Raiders hit a couple of buckets to keep themselves firmly ahead. However, their lead was only 29-23 at the end of three.

Ridgecroft continued to have chances to cut into its deficit at the free-throw line but it wasn’t meant to be. Pungo head coach Melanie Sawyer and the Raiders have waited a long time for their moment to get back to the top of the TIC mountain. On Saturday, they left no doubt on their home floor.

“It’s been 20 long years, but we finally did it,” Sawyer said. “We wanted to cut down the nets on our home court and we did that. I’ve been asking Lauren Kelly to play the way that she did tonight and she did. Emily and Emma also played so well today and they showed a lot of leadership. They’ve worked so hard to become the players they are.”

Similar to Ricks, senior guards Emily Spencer and Allen also left their marks on the game. Allen had nine points and was named to the all-tournament team for her performances throughout the week.

“It was a team win,” Allen said. “It’s the best thing that’s happened since I’ve been at Pungo. A win like this definitely boosts our confidence for the state tournament. The best part about it is winning the title on our home court.”

Emma Williams, who had eight points, seven rebounds and four steals, was also named to the all-tournament team for the Raiders. While she didn’t score in this game, Spencer was named all-conference and played a huge role in setting up the team’s offense. Sawyer was named TIC Coach of the Year after her Raiders pulled off an amazing victory. The Raiders ended the night in March Madness mode by cutting down the nets after the awards were handed out.

By LAIEKE ABEBE For the Daily News BELHAVEN — Despite leading for most of the game, the Terra Ceia boys... read more