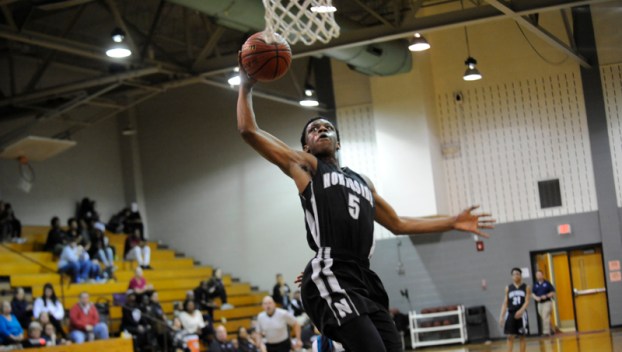 ON THE RISE: Northside senior Johnathan Clark elevates to finish at the basket during the Panther’s Senior Night win over Southside Tuesday. (Sean Finnerty | Daily News)

PINETOWN — All the Panthers fans in attendance for the pregame Senior Night ceremony were treated to an exciting game between cross-county rivals filled with scoring runs from both teams. But in the end, the Northside boys basketball team had too much offense for Southside, as the Panthers won, 89-63, Tuesday night.

Northside head coach Jared Adams was pleased with how his players handled seeing their large lead dwindle away on multiple occasions and still get a victory for their seniors — Johnathan Clark, Kenneth Winfield and B.J. Paniagua.

“I always want to get a win for the seniors,” Adams said. “We’ve been working on some things. We struggled a little bit right there, transitioning on defense, had some miscommunication. They (the Seahawks) got hot, shot the ball well from the outside to close the gap on us a few times, had us on the ropes. But we’ve been preaching all season: if a team shoots a 3, we don’t have to match it with a 3. Even though they closed the gap on us a couple times, we didn’t panic, still moved the ball well, still pushed it up the floor and had some good looks on offensive possessions.”

The Panthers (13-7, 7-4 1A Coastal Plains Conference) established control over the Seahawks (5-16, 1-10 1A CPC) from the get-go, building a 14-2 lead with 4:42 still left in the opening quarter. Using its press, Northside pressured Southside into turnovers, allowing the Panthers to get into transition where they thrive.

Rashod Smith scored 12 of his game-high 39 points in the first period, showing his range by drilling two 3-pointers and attacking the basket as well. Northside stretched its lead to 29-8 when the quarter came to a close.

Southside responded in the second with an 18-4 run to open the quarter. Hundley Stallings caught fire to spark the run, hitting a pair of 3-pointers, a mid-range jumper and completing a three-point play through the first four minutes of the second. The sophomore finished with the game with 15 points.

Seeing its lead cut to 33-26, Northside went into overdrive to close out the period. Smith answered Stallings’ final 3-pointer with one of his own to push the Panthers’ lead back to 10 points. A bit later, Zach Green set up Clark for an electrifying all-oop dunk that sent the crowd into hysterics, and Northside rode the excitement in the building to push its lead to 50-28 at halftime.

Clark put on a show all game, throwing down another alley-oop in the fourth. The senior, who scored 22 points, also dazzled with his dribbling and got it done on the defensive end, recording several emphatic chase-down blocks and coming away with several steals.

After the game, Adams was full of praise for his senior captain.

“He’s just an athlete. I mean he just finds a way to do it, works hard at practice,” Adams said. “He impresses me more and more each game. He leads the team vocally on the floor, as well as by showing it. But he’s not a boastful player, very humble. He just shows up day in and day out, ready to play.”

Clark wasn’t the only Panther senior in action. Winfield scored nine points to finish as Northside’s third-highest scorer in the game, and Paniagua, who leads the Panthers with six charges drawn this season, supplied his usual grit and hustle grabbing rebounds and tracking down loose balls and chipped in with two points.

In the third quarter, it was Southside’s Jalen Kirkman’s turn to heat up. The senior, who led the Seahawks with 20 points, drained four 3-pointers to fuel a 17-5 run. Southside ended up outscoring Northside, 22-11, in the third quarter, cutting the Panthers’ lead to 61-50.

Southside head coach Sean White said if his team can sustain its third-quarter performance over an entire game, the Seahawks could be competitive with every team in the conference.

“I think that shows them, they finally know that they don’t have to rush everything, that they can do what they did the third quarter and stay in it,” White said. “I’m pleased with their effort they gave. If we could’ve been doing this all year, we would’ve definitely beat some more teams that we lost to.”

Unfortunately for the Seahawks, they didn’t get any closer in the fourth quarter, as Northside scored 28 points to put the game out of doubt.

Both teams finish the regular season tomorrow with away games. The Panthers travel to Jones Senior, while the Seahawks head to South Creek.

The Lady Panthers pounce all over Southside