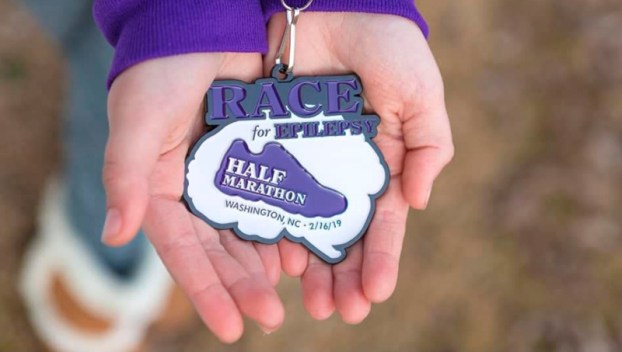 EPILEPSY AWARENESS: With options for both serious and casual runners, the Race for Epilepsy this Saturday offers area residents a chance to learn more about epilepsy, as well as help raise money to research a cure. (Run for Epilepsy)

It’s literally the biggest footrace benefiting epilepsy research in the world, and for the third year running, the Race for Epilepsy Half Marathon/5K returns to the Washington waterfront Saturday morning.

“There are tons of 5Ks, but there’s nothing like a half marathon, so this is the only one I’m aware of,” event organizer James Patterson III said.

Patterson, a Washington resident, suffered from epilepsy prior to undergoing brain surgery to help correct his condition. Proceeds from the race benefit Citizens United for Research in Epilepsy, an Illinois-based nonprofit with a mission of finding a cure for epilepsy. Since 2017, the race has raised $8,000 for CURE.

Locally, Patterson has seen significant support for the event since starting it three years ago. From making arrangements with city officials to partnering with local running groups such as the Sole Train Runners, the event has gained traction in Washington. Beyond the city, Patterson said he has made connections with other North Carolinians who either have epilepsy or personal connections with someone who does.

Patterson, himself a serious runner, has taken the extra step of having the race course certified as a U.S.A. Track and Field course, giving competitive runners greater incentive to participate in the event.

“We hope to have about 200 participants this year,” Patterson said.

While the event will help raise money for epilepsy research, it’s also about raising awareness and helping eliminate some of the stigma surrounding the condition. Patterson says misconceptions about what individuals with epilepsy can and can’t do often lead to misunderstanding.

“The overall goal, besides raising money, is to educate the public how individuals with epilepsy, can with certain variables, can hold a job,” Patterson said. “There’s that negative stereotype that people who have seizures can’t work, but there are exceptions to that.”

Cost for registration the day of the event is $65 for the half marathon, $35 for the 5K and $5 for the fun run/walk. Online entry fees are $10 less if made today. Registration will begin at 6 a.m. Saturday at a tent set up near the intersection of Stewart Parkway and West Main Street. The race begins at 7 a.m. and will pass through downtown Washington, east Washington and Washington Park. Some roads may be blocked off during the race.