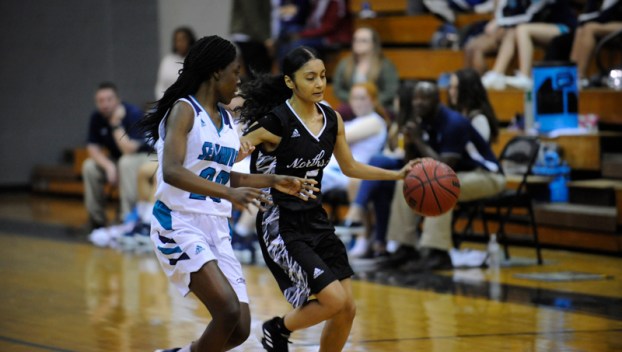 The Lady Panthers pounce all over Southside

PINETOWN — Overcoming a slow start on the offensive end at home Tuesday, the Northside girls basketball team went on to dominate proceedings against Southside to come away with a 44-12 victory on Senior Night.

Both Northside (8-8, 5-6 1A Coastal Plains Conference) and Southside (8-11, 3-8 1A CPC) had trouble finding the basket in the early goings of the game. But after ending the opening quarter with a 2-2 scoreline, the Panthers began generating some offense in the second. Thanks in part to six points from Ve’Era Holloway, Northside scored 13 points in the period to take a 15-5 lead into halftime.

The Panthers continued stretching their lead in the second half, finding success through senior Gabby Slade, who would attack the basket and dish off to an open teammate. The Seahawks’ offensive woes continued, as they had trouble with turning the ball over and had a poor night shooting the ball.

Jasmine Blango led Southside with six points and was the only Seahawk with multiple made field goals. Shantel Cannon, Laquisha Woolard and Zarie Cobb each chipped in with two points.

Both Northside and Southside will wrap up the regular season tomorrow with games on the road. The Panthers will travel to take on Jones Senior, while the Seahawks will head to South Creek. Both games are slated to tip off at 6 p.m.